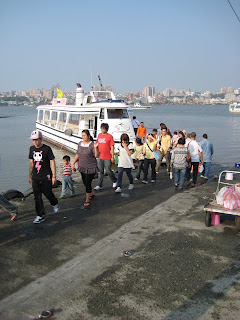 The very frequent ferry (top picture) that links Danshui, the historic seaside town near Taipei, with Bali, the town on the south bank of the Danshui River, makes for an enjoyable and inexpensive (NT$39 return) excursion.

Until a few years ago, there was very little to see in Bali. It now has a major museum, Shihsanhang Museum of Archaeology, a cycling path and - right where you disembark from the ferry - mudbanks alive in crabs (lower picture) and mudskippers. 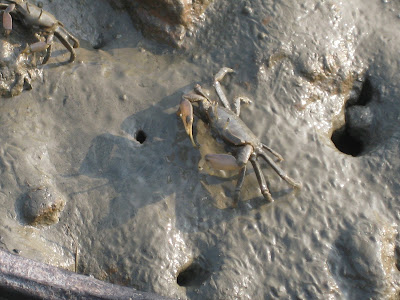 Labels: getting around, New Taipei

I recently watched Typhoon Island, a 48-minute documentary co-produced in 2004 by the BBC, Germany's WDR, Austria's ORF and Taiwan's Public Television Service. It's an excellent introduction to Taiwan's ecology and highly recommended. A short excerpt can be seen here; my copy came courtesy of booksfromtaiwan.com.
Posted by Steven Crook... at 6:43 AM No comments:

Labels: ecotourism, Taiwan in the media, things that aren't in the guidebook

By yacht to Taiwan

This article, posted on the internet late last month by a New Zealand couple who sailed their yacht from Japan to Kenting National Park, is worth reading even if you don't plan on arriving in your own vessel. Despite encouragement from the government, yachting has never really taken off in Taiwan. Cruise-ship arrivals are certainly picking up, however.
Posted by Steven Crook... at 12:00 AM No comments:

Labels: coast, getting around, national parks, Pingtung, things that aren't in the guidebook 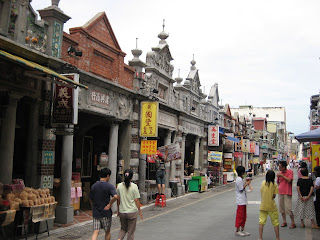 Heping Street is one of the old thoroughfares that make up Daxi's charming if touristy merchant quarter. According to this website, the architecture that can be seen here, 'was popular during the Japanese colonial rule of Japan’s Taisho era. The picture patterns - including Greek mountains, Roman columns, Chinese-style fish and bats - seen at the stores on Heping and Zhongshan old streets, are a mixture of baroque, Taiwanese, Greek, and Roman styles'.

The town itself, in Taoyuan County, makes for a good stop if you're heading inland to the North Cross-Island Highway. It can also be visited in conjunction with Sanxia, a short distance away in New Taipei City.
Posted by Steven Crook... at 4:47 PM No comments: 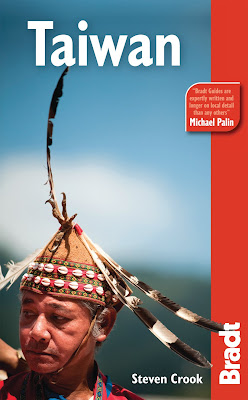 The cover photo for my book was taken by Rich Matheson and was taken in his wife's home township, Namasia in Kaohsiung County. The book is now listed on amazon.co.uk and amazon.com as available for pre-order, although it won't hit the shops until October or thereabouts. One hopeful sign: According to the amazon.co.uk/amazon.com ranking system, it's already selling better than my first book about Taiwan, Keeping Up With The War God.
Posted by Steven Crook... at 3:44 PM 1 comment:

Caught in a culture clash

Neil Taylor, who writes the Bradt Travel Guides to Estonia and Baltic Capitals, visited Taiwan last month for the British newspaper The Independent. His article appeared on March 20; here's the first third:

"My favourite fact about Taiwan's capital, Taipei, is this: within two years no resident nor office worker will be further than 50 metres from an entrance to an underground station. It puts the estimate that Londoners are never more than 20 yards from a rat to shame.

"Taiwan has been off the map, almost literally, for decades from the British traveller's perspective. It used to style itself the "Republic of China", much to the irritation of the much larger People's Republic of China, 100 miles away on the mainland – which has long regarded this surprising and dramatic island as a thorn in its ideological side.
"China exacted all kinds of diplomatic revenge: when BA flew briefly to Taipei, for example, the airline had to create a subsidiary, "British Asia Airways", to serve the route for fear of losing its valuable rights to fly to Beijing.
"But rapprochement across the Taiwan Strait means that the first non-stop flights from London start next weekend, helping to open up an island that has much to offer besides excellent public transport. Early in the year of the tiger, Taiwan is burning bright.
"In 1971, I led a pioneering tour to the People's Republic of China; at the height of the "Cultural Revolution", we were treated to an abundance of propaganda. This month, I redressed the ideological balance with a visit to Taiwan – and, for the necessary history lesson, headed straight to Taipei's memorial to Chiang Kai-Shek.
"You can't miss it: modelled on the temples in the Forbidden City in Beijing, it continues a Chinese tradition of honouring former rulers with folie de grandeur rather than grandeur on its own and is therefore plumb in the centre of the city. Carefully tendered lawns and flower beds on all sides, and then the marble of the building itself, topped with blue-glazed tiles, make clear that this is a shrine and nothing else. Eighty-seven steps – one for each year of Chiang's life – take pilgrims from ground level to the exhibition hall..."
Posted by Steven Crook... at 5:37 PM No comments: