Driving on the right side of the road

In Taiwan, vehicles drive on the right hand side of the road. Officially, that is. You can expect to see many motorcycles, even more bicycles and the odd car using the wrong side of the road. Everyone is used to it, nobody bats an eyelid. What I didn't know until today is that prior to 1946, traffic in Taiwan used the left side of the road (as in Japan, which ruled Taiwan from 1895 to 1945).
Posted by Steven Crook... at 5:38 AM No comments:

'A secret the size of a country'

In the foreword to the July/August 2010 issue of the magazine, he writes:

"Here at Action Asia we have always been fans of Taiwan and I have even used this page before to make the case that it is hugely underrated. Well, sorry to repeat myself, but staggering fresh from competing in the recent Salomon Suunto X-Trail event just outside Taipei, I am reminded yet again of the staggering opportunities there are there for outdoors lovers.

"The mountains start before you even leave the suburbs of Taipei - even the city's mass transit railway can get you close to forested hillsides and trails - and extend clear to the other end of the country. Few places can have a comparable percentage of mountainous land - in Asia, perhaps only Nepal, Bhutan and Hong Kong.

"The Taiwanese people are beginning to understand what they have got on their doorsteps, with hiking and camping really catching on, but their tourism board seems to prefer to keep this a secret from the world. That's your cue to go check it out before this little piece of wilderness gets more widespread attention. Besides the mountains to hike and bike, kayak through and paraglide from, there are empty east coast beaches, aboriginal tribes to meet, Han Chinese culture arguably more intact than that on the mainland, and a chilled-out and friendly people."

The same issue has an article on paragliding in Taiwan, written by a friend of mine, Matt Gibson. Back in 2003, I interviewed Steve White for a two-part article on Taiwan's great potential for sports tourism (Part One / Part Two).
Posted by Steven Crook... at 11:43 PM No comments: 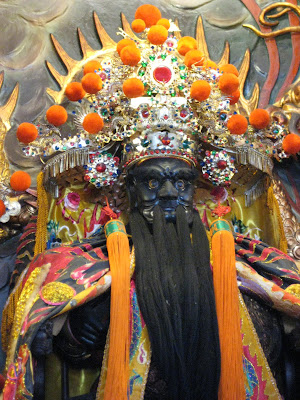 This serious looking individual is Lord Chi, 'Taiwan's most popular Wang Ye', according to the Encyclopedia of Taoism by Fabrizio Pregadio. '[His] cult appears to have developed in Fujian and can be traced back to the cult of the martial plague-fighting deity Wen Qiong.'

The words Wang Ye mean ‘royal lord’ but this name is more honorific than accurate – the only royal connection is that it's believed the original 360 of the many hundreds of spirits in this category were musicians and scholars employed by Emperor Tai Zong (reigned 626–649).

The Wang Ye cult is stronger in Taiwan than elsewhere in Greater China because of plague-expelling customs in Fujian. Whenever coastal communities in that province were afflicted by disease, they’d place Wang Ye icons on boats and set them adrift. Prevailing currents carried brought many of these vessels to Taiwan and to the southwest in particular. That region has more than two-thirds of the island’s 1,200-plus Wang Ye temples. Knowing exactly what the boats were, Han people living along Taiwan’s coastline received them with a mixture of fear and awe; they knew that ignoring the Wang Ye was to tempt fate, so they built shrines and burned incense.
'The origin of the Wang Ye appears murky, but the term appears in Qing-dynasty gazetteers from Fujian, some of which claim that temples to these deities existed as early as the Song dynasty,' writes Pregadio. He quotes data compiled by the Japanese colonial authorities in 1918 and 1930 showing that Wang Ye temples accounted for about one in seven of all registered shrines in Taiwan; only land-god temples were more numerous.

I took the photo above in a small temple in Tainan's Anping district called Xi Long Dian. Locals 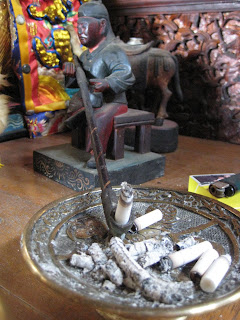 go there to propitiate Lord Chi; tourists go there to see the effigy shown below. It represents a salt merchant who was deified after his death in 1948 and who's now regarded as a land god. The effigy is believed to actually smoke the cigarettes provided by devotees!

Labels: religion, Tainan, things that aren't in the guidebook

The role of the state in Taiwan's economy

Economics probably doesn't appeal to you as much as Taiwan's natural wonders and cultural treasures, but I think the following statistics (which I came across in a 1990 book published by Taiwan's government) are interesting.

In 1952, when sugar was Taiwan's no. 1 export and sugar refining was nationalised, the government controlled 52% of the island's industrial production. By 1972 this proportion had fallen to 19%, and by 1988 it was 10%. Of course, the state's declining role in industry isn't due so much to the privatisation of state-owned enterprises (though there has been some, for example Taiwan Salt Co. became Taiyen) as to the massive post-World War II expansion of the manufacturing and petrochemical sectors.

I wonder what the current percentage is?
Posted by Steven Crook... at 11:10 PM No comments: