Kind words from a Taiwanese reader

It's always nice to get feedback from readers. The majority of responses have been from Western or Singaporean tourists who used my book while travelling around Taiwan, but here's what one Taiwanese reader told me in an email to Bradt:

Thank you for your lovely introduction of my beloved land--Taiwan!
I am a surgeon from Taiwan and studying for a PhD in London now.
I found this book in a secondhand bookstore yesterday and decided to keep it. I have had a wonderful reading time on Saturday evening.
The history part is amazing! I never learned a lot of Taiwan history when I was in school.
I like your way to describe Taiwan—very sensitive but neutral.
This is the best travel book I have ever read about Taiwan. 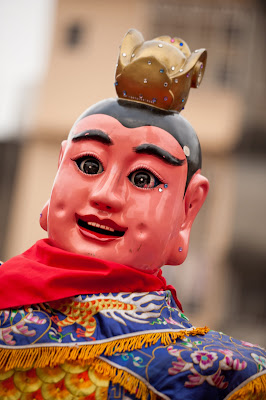 Taiwan for Culture Vultures, my new downloadable travel guide published by Guidegecko, is aimed at visitors intrigued by Taiwan's fascinating blend of cutting-edge modernity and centuries-old tradition. Available for iPhones and iPads, it's priced at US$2.99. If you already have my Bradt guide, you'll find this app complements, updates and expands on the book's contents.


Electronic platforms have several advantages over traditional printed guidebooks. They're cheaper because there are no printing or distribution costs; they're lighter to carry and can be updated and corrected. As a writer, I've appreciated being able to avoid repetition. Instead of having to explain who a particular person (or deity or ethnic group) is each time there's a mention, I simply link to a background article, like the one on major gods, or brief histories of Taiwan's historic towns.

The guide features 95 places of interest, each entry averaging 250 to 300 words and accompanied by one to four photos. Taiwan-based professionals Craig Ferguson and Rich Matheson contributed many of the images. The app cover icon shown here was taken by Matheson.

Among them are museums, temples, churches, parks, and other landmarks. Taiwan's key cultural and architectural attractions - such as the National Palace Museum, Taipei 101 and Tainan's Confucius Temples - are featured, as are many lesser-known but just as fascinating attractions. At Ten Drum Culture Village, for instance, visitors can enjoy performances that are modern yet draw heavily on folk traditions, and which have won international acclaim.

Of the 95 sights, 31 aren't mentioned at all in my Bradt guidebook. In some cases, like Houtong Coal-Mine Ecological Park, they opened too late to be included. For many others, it was simply a matter of space; this is why the Zheng Family Shrine didn't appear in the book. I researched the app by combing both English- and Chinese-language sources, in addition, of course, to visiting each spot at least once. Many of the details I've included don't appear in any of the major English-language guidebooks to Taiwan.

There's plenty for those who want to learn about and appreciate traditional arts and crafts. If they want a more outdoorsy experience, they can head to the Old Mountain Railway Line. Those with environmental interests will enjoy the new Magic School of Green Technology. All in all, I think the app has a really good mix.
Posted by Steven Crook... at 11:47 PM 5 comments: 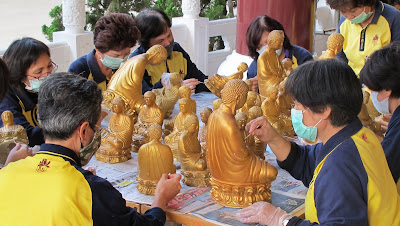 Last week I drove to Foguangshan to see the new Buddha Memorial Center, which opens to the public on December 25. It also happened to be the one day each year when the 14,800 Buddha icons in the Main Shrine are removed, cleaned by volunteers (above) and then put back in their sconces (below). 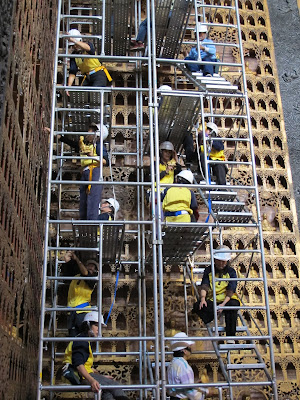 Books: Taiwan From the Eyes of a Foreigner 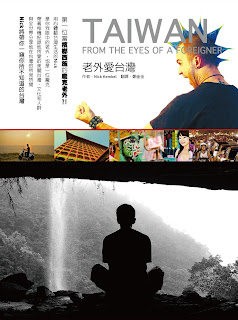 Nick Kembel, a Canadian who's been living in Taiwan since 2008, has produced an interesting and beautifully-illustrated book. Kembel's blend of history, travelog and personal observations is aimed at both Taiwanese people who'd like to know what Westerners think of their country and Western people curious about the island's culture. The text is in both English and Chinese; the two versions run side by side, which is very useful if you're reading one and want to refer to the other to find a place or person's name in its original language.

As someone who's read a lot of Taiwan's history (and been here much longer than Kembel), I expected to find a few odd interpretations of the past in a book written by a relative newcomer. But Kembel has clearly done his homework, and comes across as very fair-minded. As a result, this is a book I'd confidently recommend to anyone thinking of relocating to Taiwan. The 100-odd photos deserve a special mention. They're very good (if a little small), and show not only conventional tourist attractions like temple parades and aboriginal dancers, but also prosaic scenes such as crowds of commuters and parking lots packed with bicycles.

Taiwan from the Eyes of a Foreigner is published by Tsai's Idea, is available throughout Taiwan and costs NT$366.
Posted by Steven Crook... at 3:55 PM 2 comments:

According to Taiwan: A New History, edited by Murray A. Rubinstein:

"The number of farm households fell from 51% in 1953 to less than 20% in 1990 as agriculture's share of the net domestic product decreased from 34% to only 4% [it's now something like 1.7%]. The dispersal of industry into Taiwan's villages has been a critical factor in this transition, at once raising farm household income... also making it possible for farmers to retain their residence in the countryside."

Nowadays many of Taiwan's small villages are dominated by elderly people, almost everyone aged 18 to 45 having moved away to study or work. Few Taiwanese, it seems, like living in a village and commuting to work. If anything, the reverse is more common. A great many people live in cities (because the schools are better, they say) even if they work in fairly rural places. South Taiwan Science-based Industrial Park in Tainan is a good example: Most of the engineers who work there live in downtown Tainan, not in nearby towns where housing is cheaper.
Posted by Steven Crook... at 12:44 AM No comments: