This fascinating 2008 article in the Wall Street Journal relates how some temples in Kinmen County, an archipelago within shelling-distance of China, have toned down their anticommunist message in recent years, ever since tourists from the mainland - rather than ROC soldiers posted there to keep the communists at bay - have become a backbone of the economy.
Posted by Steven Crook... at 6:59 PM No comments:

Labels: islands, religion, things that aren't in the guidebook

A typical winter's day in the mountains of the south 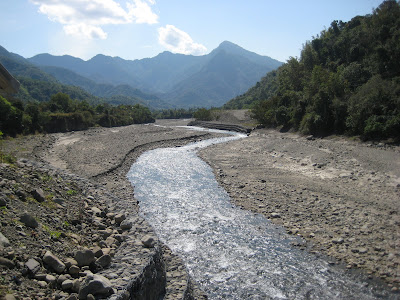 Driving towards Namasia in Kaohsiung, on the final day of the Year of Tiger. Days like this - sunny yet not unpleasantly hot - are very common in the southern half of Taiwan between October and March. In the north, winters are decidedly wetter and colder.
Posted by Steven Crook... at 7:45 PM No comments: 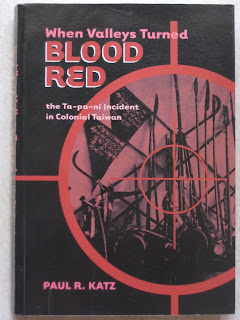 This book, written by an expert in Chinese and Taiwanese religions, explores a 1915 rebellion against Japanese rule in south Taiwan that left well over 1,000 dead. As author Paul R. Katz explains in his Introduction, the Ta-pa-ni Incident:

"[which was] named after the town where the fiercest fighting took place, was one of the largest acts of armed resistance to occur during the colonial era... [rebels] quickly overwhelmed numerous police stations in the mountains of today's Tainan and Kaohsiung counties. The uprising lasted for over one month and was put down only after sustained counterattacks by Japanese military and police forces."

That town is now known as Yujing (玉井). Fighting also convulsed the districts now called Nanhua (南化) and Jiaxian (甲仙). Because the rebels were led by a Kaohsiung native called Yu Ching-fang (余清芳), the revolt is also referred as the Yu Ching-fang Incident.

Japan did a great deal to develop Taiwan's economy and infrastructure. However, the beneficiaries were more often than not Japanese businessmen and corporations. (Most of the European and American firms active in Taiwan in the 1880s and 1890s found themselves squeezed out by World War I). As Katz explains, many local gentry resented Japanese rule for this reason, and ended up throwing in their lot with the rebels. He also explores how religion motivated the leaders.

It's a thorough and interesting book, but the subject matter is perhaps a little obscure for most readers.
Posted by Steven Crook... at 4:25 PM No comments: 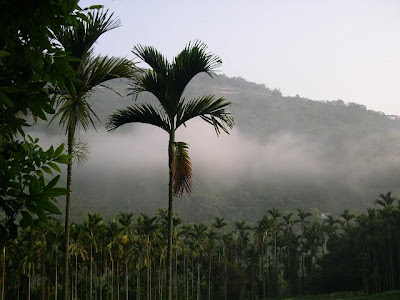 Morning mist settles over a betel nut plantation in the foothills of Chiayi County.
Posted by Steven Crook... at 4:54 PM No comments: