The old logging village of Lintianshan 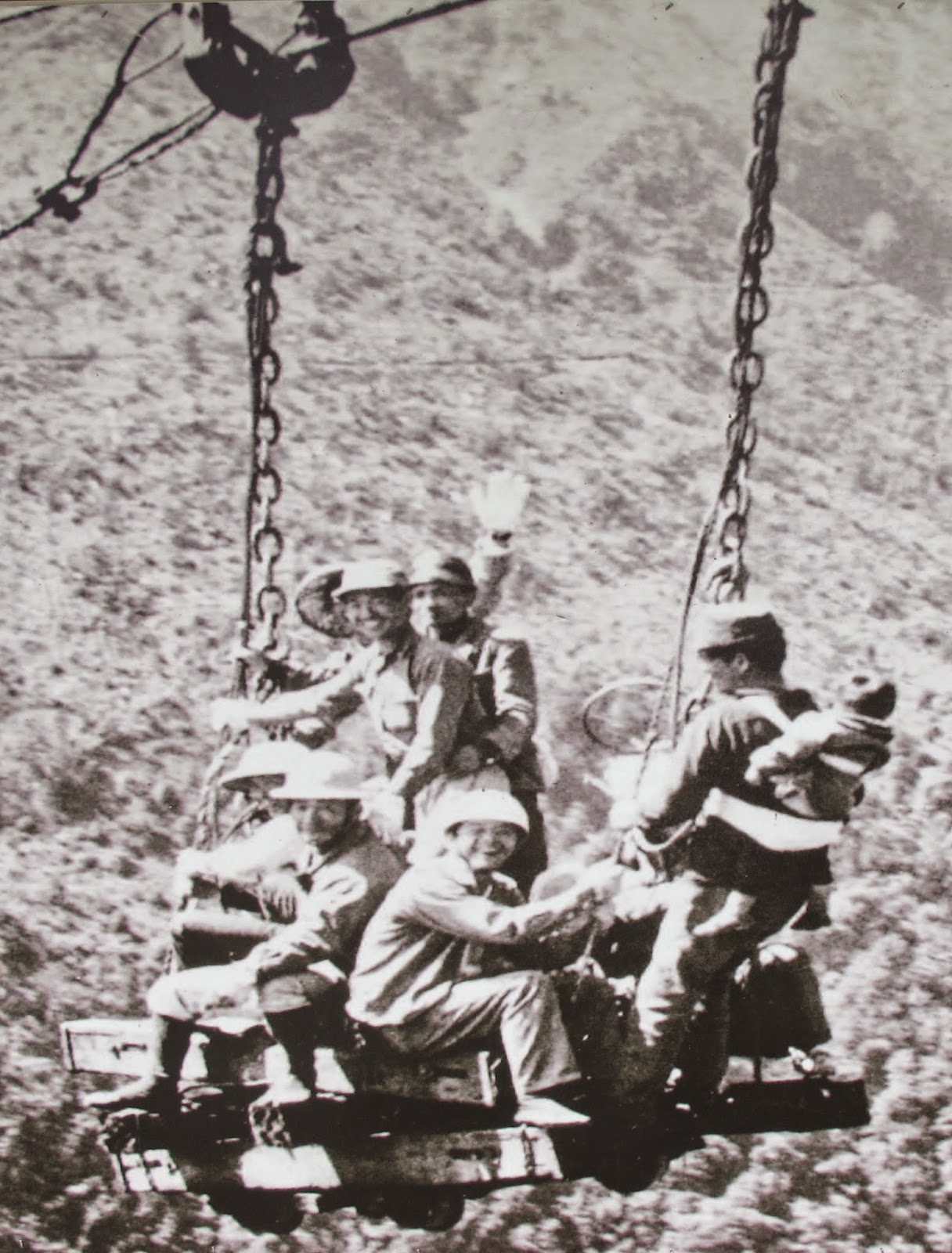 These images are displayed in Hualien County's Lintianshan (林田山), which between the 1920s and early 1970s was a centre of Taiwan's timber industry. According to this article, at one point over 2,000 people lived here. Now just a handful of households remain. Lintianshan itself is at the base of the mountains; the actual felling was done at higher elevations, reached by a network of narrow-guage railroads (see the pictures below) and cable links. In the photo above, notice the man on the right has a baby strapped to his back! 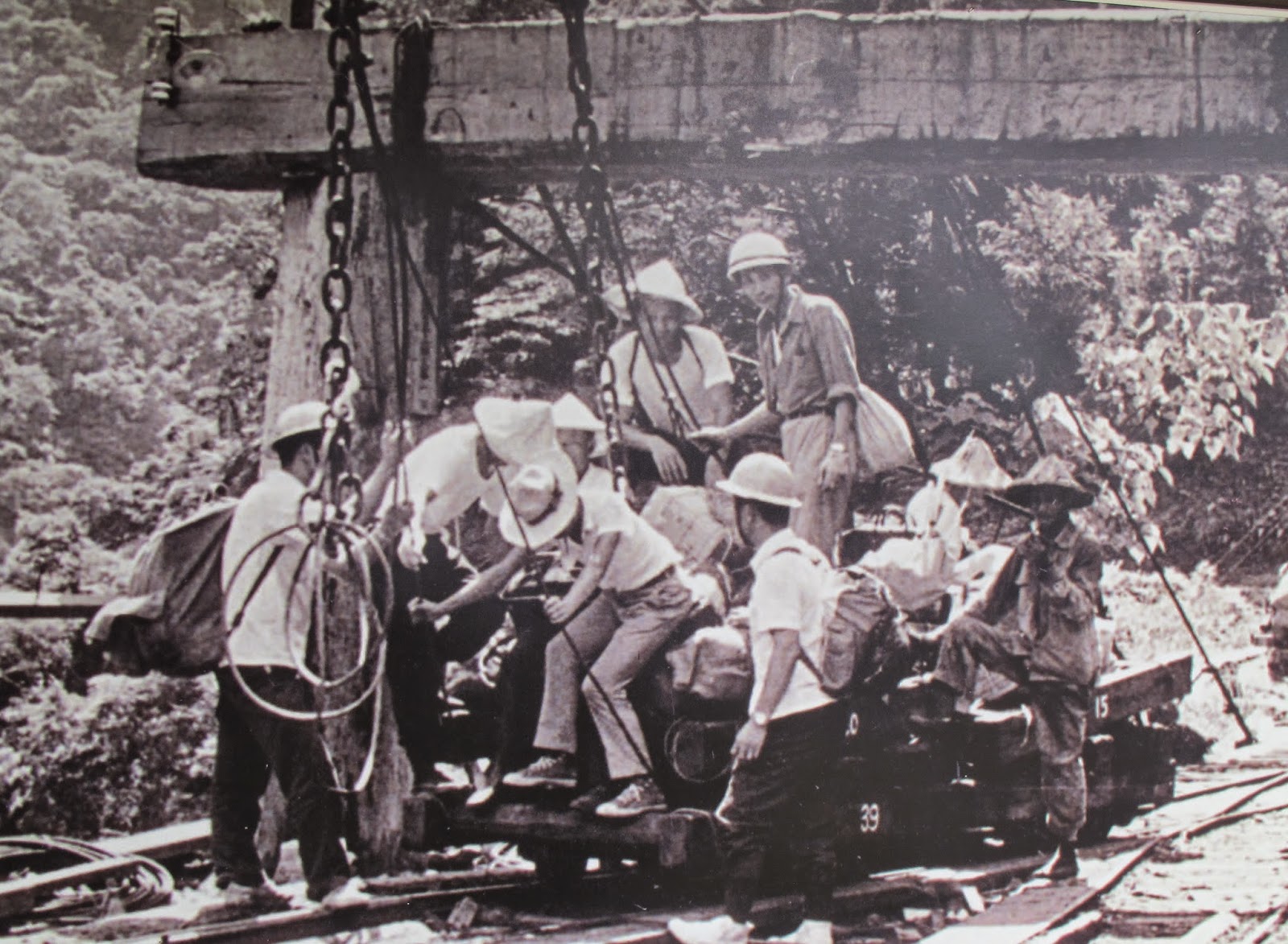 Industrial accidents were surely very common given the absence of helmets and harnesses, not to mention the precipices and unstable cliffs which characterize Taiwan's mountains. 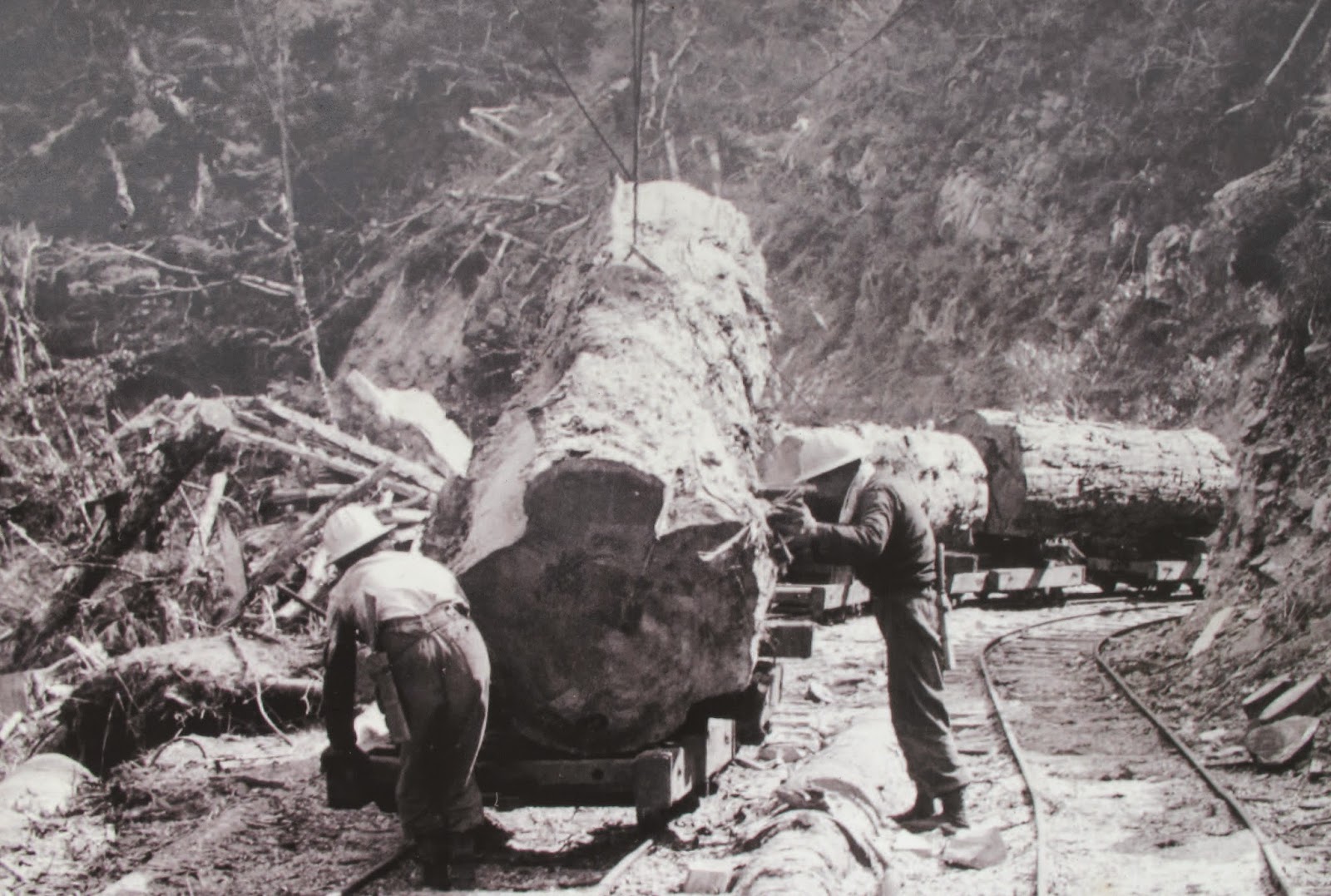 To get an idea how far Lintianshan's logging railway penetrated into the interior, see maps 27 and 28 in the Central East Taiwan section of taiwanrailways.com.
Posted by Steven Crook... at 9:28 PM No comments: 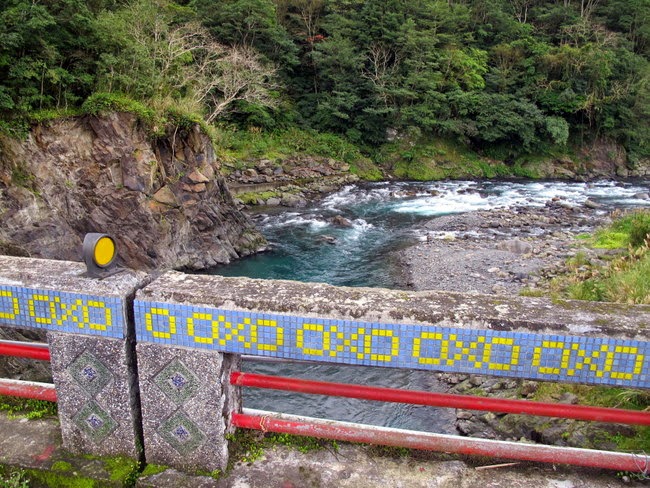 One of the better photos I took on the murky but highly enjoyable day I spent in Wulai in January, researching this article. Even though the main village was crowded (it being the height of the hot-spring enjoyment season), peace and quiet wasn't far away...
Posted by Steven Crook... at 8:10 PM No comments:

Books: On the Road to Freedom 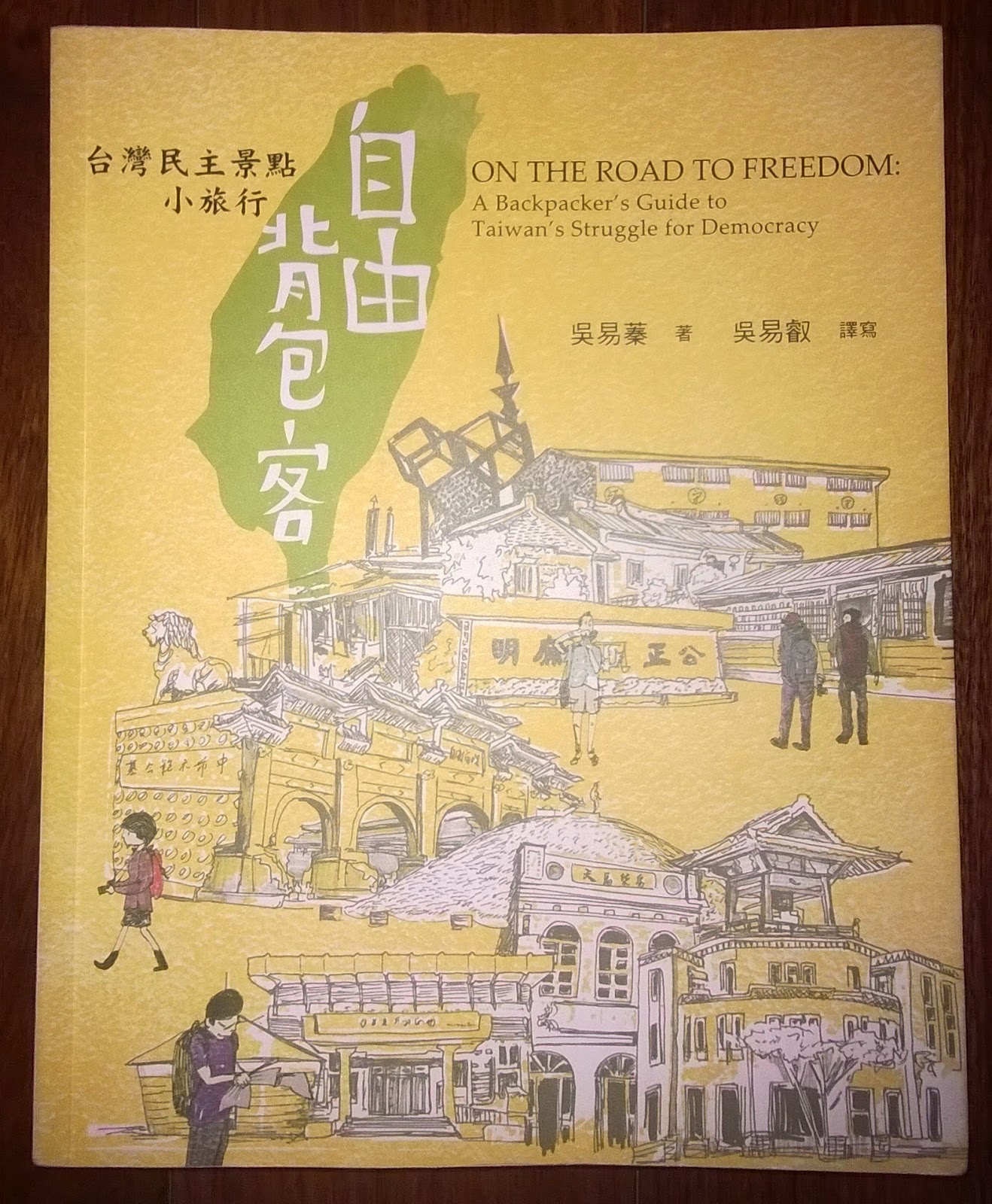 On the Road to Freedom: A Backpacker’s Guide to Taiwan’s Struggle for Democracy is a niche guidebook published at the end of 2013 by Taiwan Interminds Publishing, the company behind the excellent series of guides to Taiwan’s indigenous communities by Cheryl Robbins. It was written Wu I-chen (吳易蓁), a theatre director and filmmaker, and translated into English by Harry Yi-jui Wu (吳易叡). Despite their similar names, they appear not to be related.


Anyone interested in Taiwan's political history will find this bilingual 238-page an interesting read and well worth the price (NT$380), even though there are some annoying spelling and style inconsistencies. The city and county just south of Taichung is spelled Changhua (彰化) at one point, Zhanghua at another. On page 51, the first Taiwanese person to receive a PhD degree is referred to as Mosei Lin (林茂生), which is also the spelling used by Wikipedia. On page 98, however, he's Lin Mao-seng. Both entries mention his disappearance and likely execution in the wake of the 2-28 Incident. The former Yilan county magistrate and justice minister Chen Ding-nan (陳定南) is Chen Ting-nan in the table of contents (a spelling very seldom used in news reports), then Ding-nan Chen on page 131.


Overall, I could find very little wrong with the book. It covers not only museums, memorials and locations where important events happened, but also graveyards and former jails. There's useful information on several places I've never been to and a few I'd not even heard of. The section on Chiang Wei-shui (蔣渭水) and his campaigning during the Japanese colonial era is especially good. However, there's no mention that Cheng Nan-jung's (鄭南榕, aka Nylon Deng) widow, Yeh Chu-lan (葉菊蘭) went on to enjoy a high-profile political and ministerial career. Also, readers might be interested to know that one of Lin Yi-hsiung's (林義雄) daughters survived the 1980 murders (pages 60 to 63), grew up in the United States, and later returned to Taiwan as a missionary. She's now known as Judy Linton. The only actual error I found is on page 136, and it's far removed from the book's main theme. Tien Sung Pi Train Station in Yilan County isn't “one of the only two remaining wooden train stations in Taiwan.” There are three in Greater Tainan alone.
Posted by Steven Crook... at 8:15 PM 2 comments:

The disappearance of Taiwan's tobacco farms

Just as the demise of Taiwan’s salt industry doesn’t mean people have stopped adding salt to their food, and the dwindling of the sugar industry doesn’t indicate people are eating less candy, the near-collapse of tobacco growing in Taiwan isn’t the result of people quitting smoking. Fewer young men appear to be lighting up than before, but young women are fast picking up the slack.

Since Taiwan joined the WTO in 2002, the Taiwan Tobacco and Liquor Corp. (TTL) - a state-run enterprise and still the island’s dominant maker of cigarettes - has been buying much less tobacco from local farmers, and far more from cheaper overseas suppliers. The price of Taiwan-grown Virginia tobacco has slumped to the point where few farmers see any point in cultivating this once-lucrative cash crop. 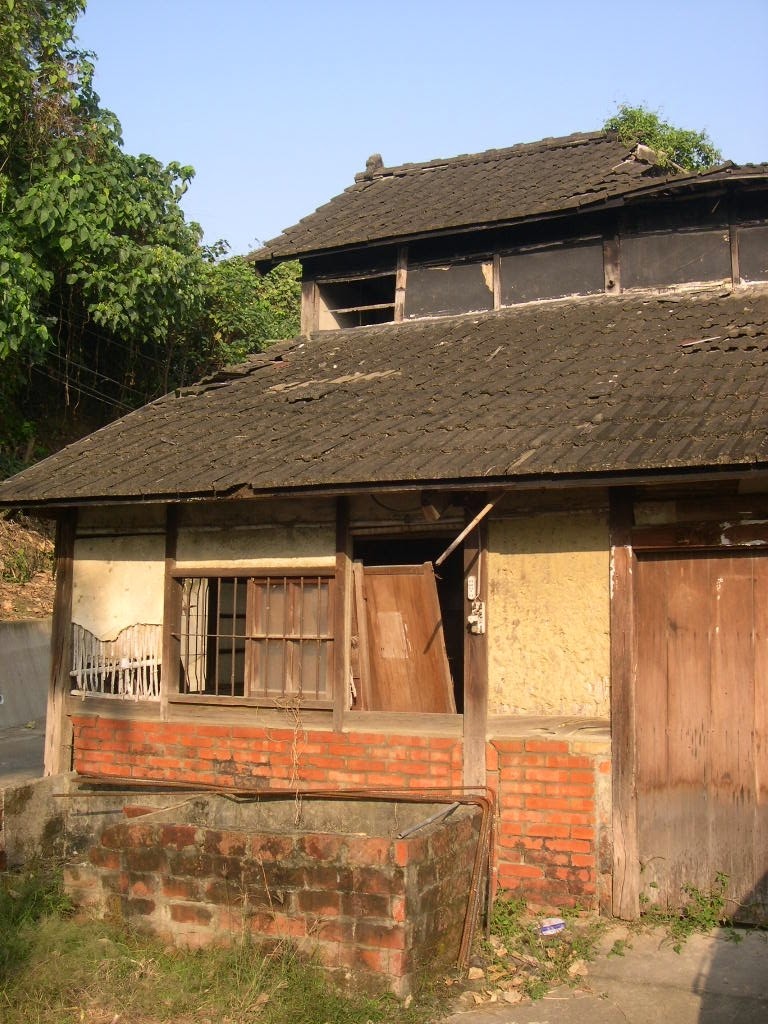 Meinong (美濃), now part of Kaohsiung City, is the place in Taiwan most closely associated with tobacco, and the best place to go see what remains of the industry. Now that fields of tall green tobacco plants are hard to find, the most obvious sign of tobacco’s role in the local economy of yore are the town’s distinctive but redundant curing sheds.

These small, sloping-roof buildings [pictured right] seldom cover more than 40m2 of land, and are made of various materials. Each shed has two floors. On top, there’s always a ventilation tower, which looks like the kind of place where you might lock up a mad aunt.

If you’re driving in from Qishan (旗山), before you reach downtown Meinong, turn right down Fuan Street (福安街). Several tobacco sheds, and also some of the best-preserved traditional courtyard homes, can be found in this community. The shed at no. 24 may not be as attractive as other tobacco buildings in Meinong but it is, almost certainly, the oldest surviving tobacco building in the area. It dates from 1938, the year in which Meinong’s farmers began cultivating tobacco. 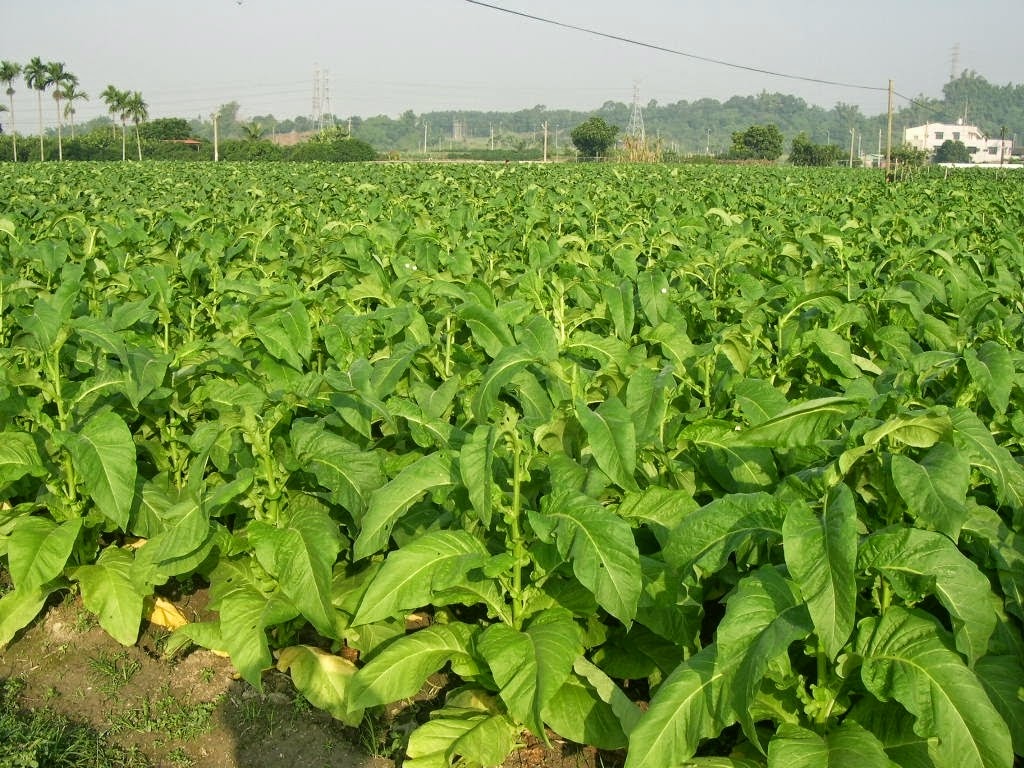 Before 1938, Meinong’s principal crops were sugarcane, bananas, and black beans. Meinong wasn’t the first place in Taiwan to grow tobacco, and after 1938 it wasn’t the only place where Virginia leaf was cultivated. In Chiayi, Taichung, Miaoli, Yilan and Hualien, significant amounts of land were given over to tobacco [a field of which is pictured here].

Meinong’s first curing sheds were constructed according to Japanese designs; in architectural terms, they are regarded as “Osaka-style.” Some are brick. Others have a concrete first floor, and a second floor made of cheaper materials. The roofs are usually tile, with rusting ironwork atop the ventilation tower. Many are made of wattle-and-daub, the wattle consisting of slats of split bamboo, onto which daub (a mixture of clay, soil, rice straw, chaff, and pig dung) has been slapped. A lot of traditional homes and farm buildings in Taiwan were constructed the same way; it’s a cheap, easy way to build, but if the hard surface of the wall gets cracked, the entire structure deteriorates very rapidly. 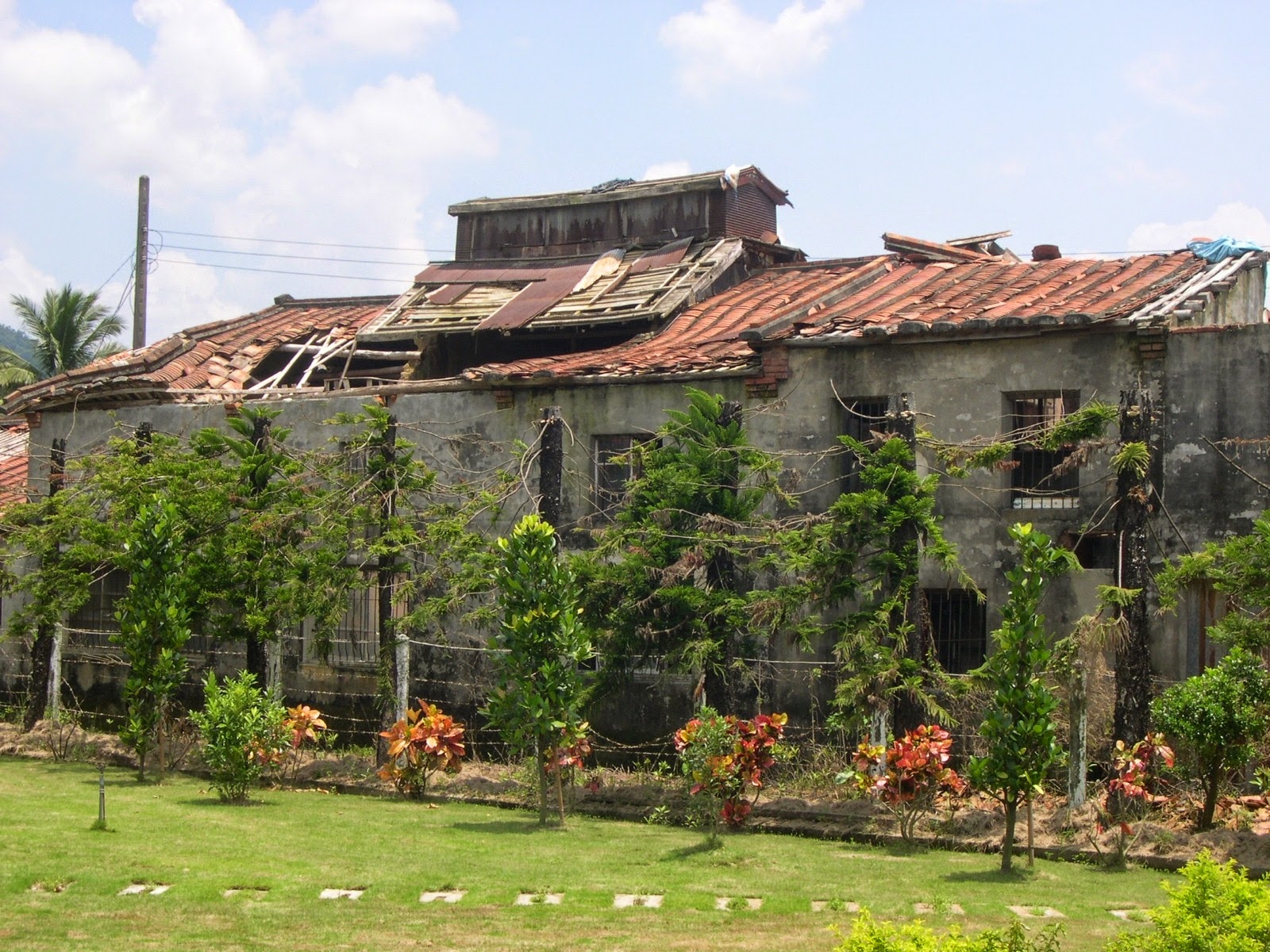 To better understand the curing process, do take a look inside one of these sheds. You’ll notice that the central chamber, where the curing took place, has thick walls and a thick metal door. If this door is open, gaze inside and you’ll see that the room goes all the way up to the ventilation tower at the top of the building. Instead of floors or ledges, there are wooden racks on either side. This is where the tobacco would be hung for curing.

The curing fire would be under the floor of the central chamber, and it would be fed through small portholes like those on the side of a traditional kitchen stove. The shed’s other rooms were used to store firewood. Flue curing consumes a great deal of fuel, and ecologists say this stage of the tobacco-plant-to-cigarette process is disastrous in environmental terms, and has become the No. 1 cause of deforestation in Malawi and other countries.

As soon as tobacco is harvested – in Meinong, the leaves were usually gathered around Lunar New Year – most of the water must be removed from it, hence the need for curing. 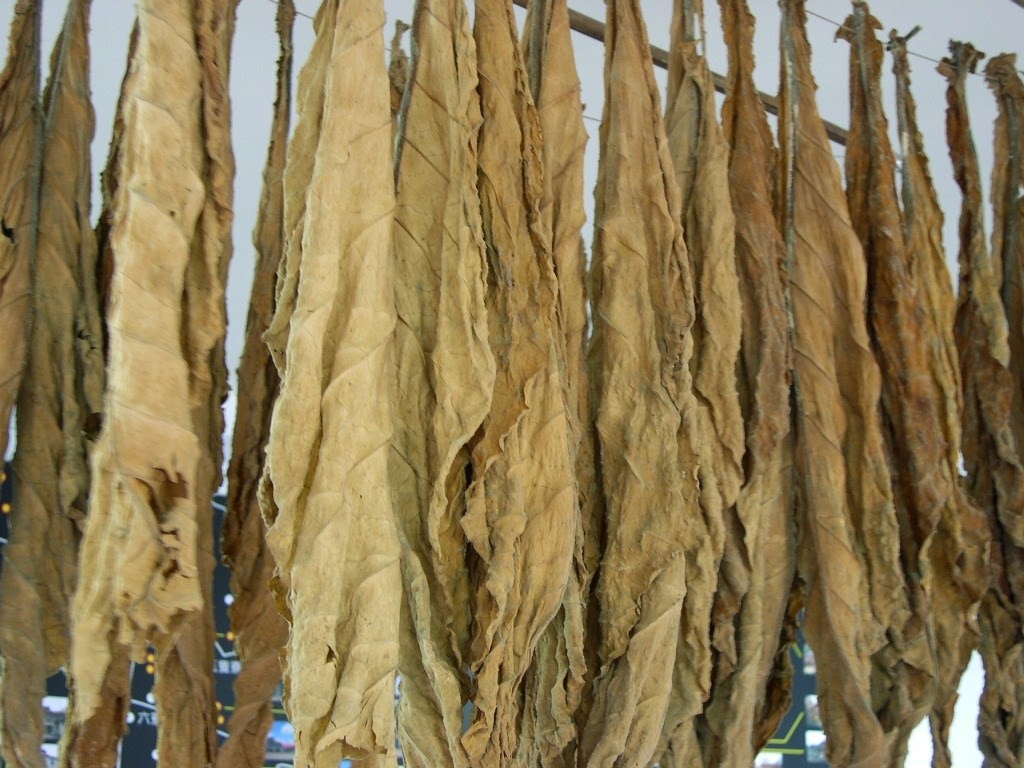 There are at least four different ways to cure tobacco. Air curing involves simply hanging the leaves under a shelter that protects them from rain but exposes them to breezes. Sun curing - spreading the leaves out under the sun - is done in a few places. Taiwan’s climate is too humid for either air- or sun-curing to be successful. Fire curing needs little explanation; flue curing, practiced in Taiwan, takes the hot air generated by a fire (but not the smoke or sparks), and circulates it through a tobacco-filled chamber.

With all forms of curing, timing is critical. If done too fast, the leaves end up discoloured, with can affect their flavor. If done too slowly, the leaves rot. Moreover, humidity within the curing chamber must be carefully regulated so as to allow the leaves to dry out slowly. Too-rapid drying would cause them to turn black.

In Meinong, the temperature within the chamber would be permitted rise by five degrees Celsius per day for eight to ten days, until it reached 73 to 80 degrees Celsius. Tobacco farmers used to take turns to watch the fire throughout the days and nights. By the 1990s, however, the process was computer controlled. 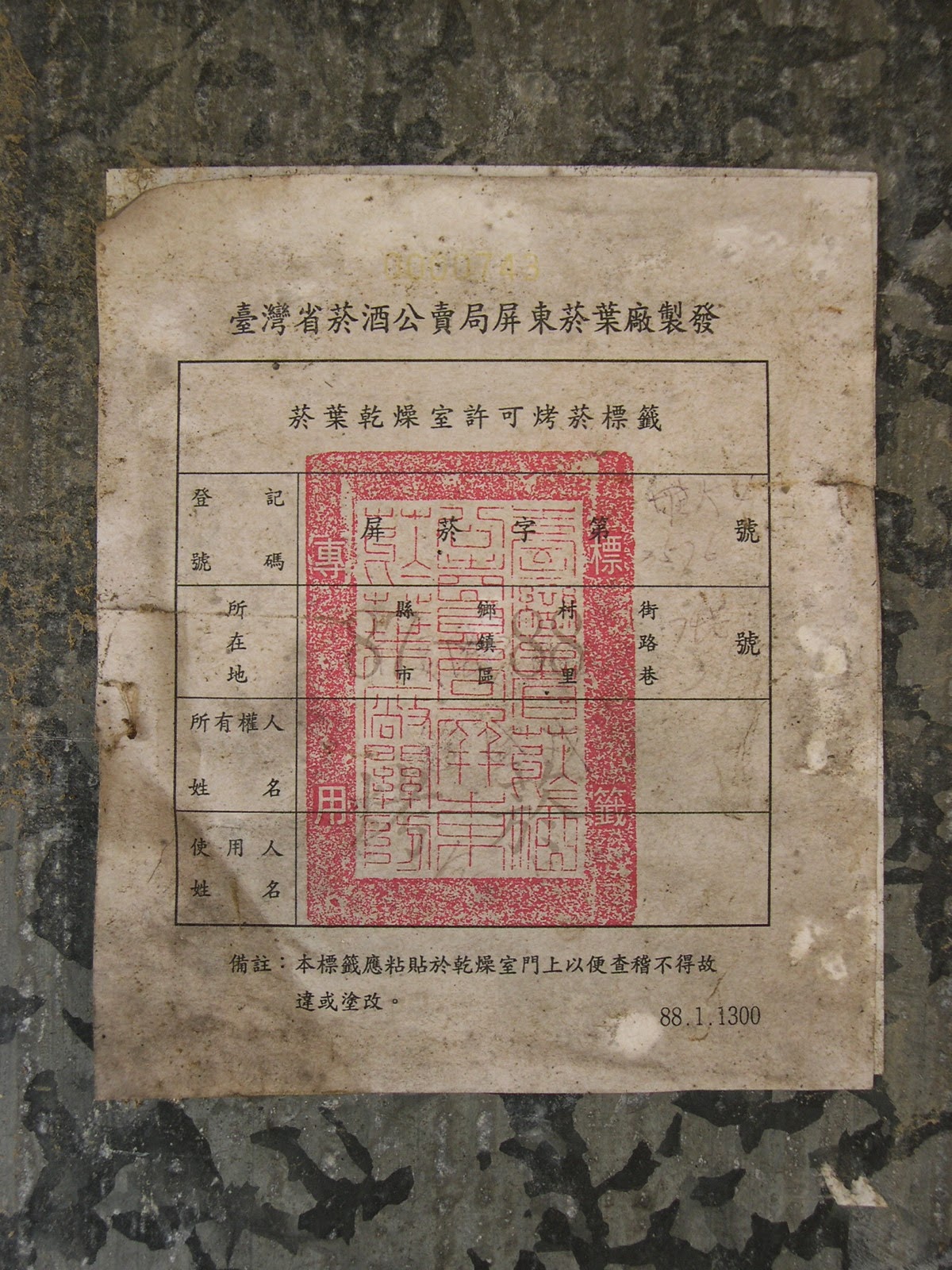 During the curing process, the leaves would change colour from green to yellow [see above]. Once cured, the chamber would be opened to fresh breezes, which would slightly re-hydrate the leaves, ensuring they were not too brittle to be turned into cigarettes.

According to a 2004 survey, Meinong used to have 1,814 tobacco barns. By the time of the survey, 402 had been demolished or destroyed by fire; 991 had been converted (often into garages or storerooms), and 421 remained intact.

As well as being the only legal retailer of cigarettes on the island, the Taiwan Tobacco and Wine Monopoly Bureau enjoyed monopsony power - it was the only legal purchaser of tobacco on the island, and could therefore determine prices. However, Meinong’s farmers weren’t ruthlessly exploited; during the industry’s heyday, a tobacco grower typically earned two to three times more than a civil servant. Not surprisingly, the area devoted to the crop expanded from 234 hectares in 1946 to 1,342 hectares in 1957, and around 2,300 hectares by the late 1960s. As recently as the 1970s, one in four Meinong families grew tobacco on their land.
Posted by Steven Crook... at 2:35 AM No comments: