Kind words from a Scottish reader

Via LinkedIn, a reader in Scotland (who writes about his travels in Scottish Gaelic) s told me:


You may be interested to know that in my opinion your Bradt guide to Taiwan was the most useful of the three I obtained before my first visit last year. As it happened, I left my copy with a friend there before I left, and I'm likely to buy another for use this year. From recollection, the use of Chinese characters was more consistent in this guide than in the other two.

Regards,
Fearchar I MacIllFhinnein
Posted by Steven Crook... at 11:56 PM No comments: 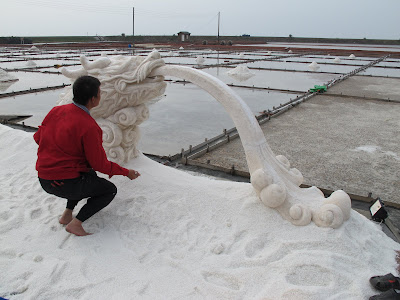 The Year of the Dragon began on January 23, 2012. To mark the new year, artists in Jingzaijiao in Tainan City's Beimen District (台南市北門區井仔腳) sculptured a dragon out of salt, a commodity which used to be produced along the southwest coast in considerable quantities.
Posted by Steven Crook... at 4:12 PM No comments:

Over the past few years, Richard Foster of Barking Deer Adventures has led quite a number of visiting twitchers to birdwatching hot-spots around Taiwan, including Tataka and Daxueshan (sometimes spelled Dasyueshan).

Since January 1, he's embarked on a 'Big Year' exercise, compiling a list of the avian species he sees on a dedicated blog. By early February, he'd seen close to 200 different birds.
Posted by Steven Crook... at 4:10 PM No comments:

Taiwan and Thailand: A few comparisons

We've just returned from a 20-day trip to Thailand, so I thought it would be interesting to compare the kingdom with Taiwan, from a traveller's perspective.

We entered two national parks, both of which charge foreign adults 400 baht and foreign children 200 baht - at today's exchange rate NT$391 and NT$191, respectively. Thai citizens pay 40 baht and 20 baht. None of Taiwan's national parks charge admission, and none of them get as crowded as Erawan's waterfalls. Entering the island's forest recreation areas costs between nothing and NT$200.

Thailand's major museums do charge for admission, sometimes up to 100 baht (NT$95). Few of Taiwan's museums charge more than NT$100. (One that charges exactly NT$100 is Lanyang Museum). Seeing the world's leading collection of Chinese art and antiques in the National Palace Museum will cost you NT$160, and half-price tickets are available are certain times each week. The National Museum of Taiwan History is currently free.

To our surprise, eating from night markets and street vendors in Thailand wasn't significantly cheaper than in Taiwan. That said, mid-range restaurants are less expensive in Thailand than Taiwan.

Offices of the Tourist Authority of Thailand (TAT) are helpful but not conveniently located, even in heavily-touristed areas like Kanchanaburi. Taiwan's policy of putting visitor information centres in train stations and other transport hubs is very sensible.

The amount of litter beside Thailand's major roads is truly depressing; if anything, the situation there is currently worse than it ever was in Taiwan, the latter having made considerable progress in recent years. That said, the two national parks we toured in Thailand (Erawan and Khao Yai) were just as clean as Taiwan's national parks.

In tourist areas, a good many Thais – even street vendors – speak some English, but few have a really good grasp of the language. There's a very widespread and heartfelt willingness to assist. In Taiwan, it sometimes seems as if the first five people you address in English are so unused to talking with non-Taiwanese they freeze up – but then the sixth turns out to speak excellent English. When exploring Thailand's countryside on motorcycle, we didn't notice many English-language or bilingual signs to attractions. When navigating Thai towns on foot, it's often hard to find road names. Almost everywhere in Taiwan, roads and streets are clearly labelled in both Chinese script and some form of pinyin.

Thailand isn't an especially dangerous destination in my opinion, but almost every year there are stories of travellers being robbed at knifepoint, or drugged on long-distance buses and waking up to find their bags have been plundered. Also, in recent years there have been violent political protests in central Bangkok, and at one point the international airport was closed. In terms of both political stability and conventional criminality, Taiwan is exceptionally safe for tourists. To put it simply, Taiwan's felons and gangsters have bigger fish to fry.

The standard of driving in Thailand has improved since I first visited in 1991, yet in both countries crossing the road must be done with great care. Also, central Bangkok is rather like certain urban areas in Taiwan in that motorcyclists treat the pavements/sidewalks as a lane along which they can zip in either direction. For foreign tourists, renting a motorcycle is far easier in Thailand than Taiwan.

Compared to Southeast Asia, the cost of lodging in Taiwan is a major disadvantage. On average, a room in a Taiwanese hotel or guesthouse costs two to three times what its equivalent costs in Thailand. Also, because many destinations in Taiwan are dominated by the domestic visitors, some very attractive homestays do not have signs in languages other than Chinese. That isn't an issue in Thailand.
Posted by Steven Crook... at 4:41 AM 2 comments: