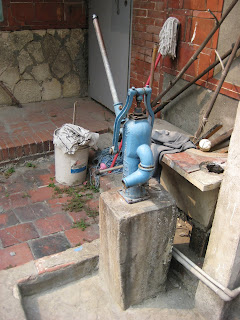 In old neighbourhoods throughout Taiwan, you can find hand pumps like the one top right, spotted in the old part of Kaohsiung's Zuoying district. Some still draw water from wells, others ran dry long ago. I've not heard of urban residences that lack their own supply of running water, yet I have seen people filling buckets from these pumps and carry them away.

Labels: Kaohsiung, things that aren't in the guidebook

For Taiwanese, the key term of the Treaty of Shimonoseki, which ended the Sino-Japanese War of 1894—95, was the ceding to the Japanese Empire of Taiwan and the Penghu Islands. Japanese rule lasted half a century.

Tens of thousands of Taiwanese took up arms when Japan tried to take possession of their new colony; a Republic of Formosa was declared on May 23 1895. Six days later, Japanese forces landed east of Keelung. Between early June and late August major battles were fought in Sanxia, Hsinchu, Dajia and, decisively, at Changhua.

The Museum of the War of 1895, located inside a Cold War bomb shelter on Changhua Mount Bagua, tells the story of Japan's military takeover and the resistance they faced. Unfortunately, the museum is entirely in Chinese with the exception of the official English-language version of Japan's official proclamation that it was taking control of Taiwan (it promises "all inhabitants of the ceded territory peacefully fully pursuing their ordinary and lawful avocations will receive full and constant protection"). There are very few artifacts from the era; even the Republic of Formosa postage stamps are reproductions (as of a decade ago, originals could be bought from stamp dealers in Taipei).

People who don't read Chinese can pick up a useful English-language leaflet.

Labels: Changhua, history, museums, things that aren't in the guidebook 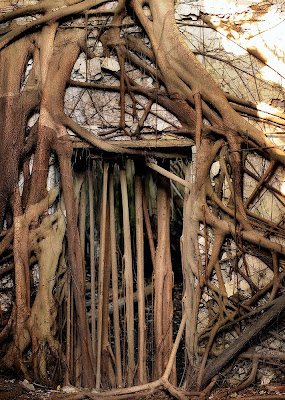 This gorgeous photo was taken by Rich Matheson inside Anping's Treehouse, a long-disused and fantastically overgrown warehouse behind the Tait & Co Merchant House in Anping, the Tainan neighbourhood that's the oldest Han Chinese settlement on Taiwan.

For some history about the Tait building and the warehouse, read this entry on one of the blogs I recommended a few days ago.

One ticket covers admission to both buildings. Inside the Tait building there's a museum that focuses on the Dutch era. Despite a few translation mistakes ('flower' when it should be 'flour'), the museum is well worth some of your time. One memorable fact I learned: It was illegal for those working in the the Dutch hospital in Tainan to inherit anything from those who died while under their care.

There's not much left of the warehouse, but the banyans growing up through it are quite surreal.
Posted by Steven Crook... at 9:05 PM No comments: