The skyline of Kaohsiung 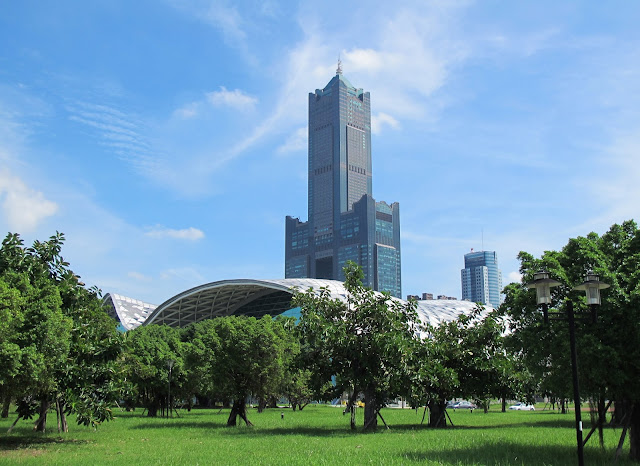 These images show two of Kaohsiung's landmark buildings: In the foreground, Kaohsiung Exhibition Centre; behind it, the prong-shaped 85 Sky Tower. The former is a convention and trade-show venue which was inaugurated in April 2014. The latter was finished in 1997 and was for several years the tallest structure in Taiwan, until the completion of Taipei 101. Inside this 378m-high there's a swanky hotel, a great deal of unused office space, and some illegal homestays. One of the architects who designed it was C.Y. Lee, who later won great fame for Taipei 101. Kaohsiung's new light-rail system, which is due to commence regular services later this year, will offer very convenient transport to the exhibition centre. 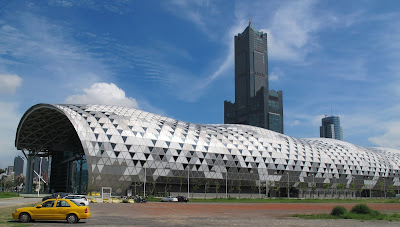 Labels: architecture, getting around, Kaohsiung 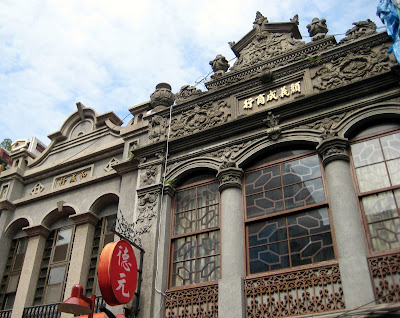 Taiwan's Tourism Bureau is sometimes criticized for appearing to focus on attracting ever-increasing numbers of mainland Chinese visitors while paying insufficient attention to other markets. It's certainly true the tourism boom of recent years has been unbalanced. Headline attractions such as Taipei 101, the National Palace Museum, Sun Moon Lake and Taroko Gorge pull in so many Chinese tour groups that some Taiwanese say they now avoid these places. Also, many worry the crowds scare off other kinds of tourists, such as Japanese and Western backpackers who hope to really get to know Taiwan.

It's good to know, therefore, that in recent years the Tourism Bureau has been promoting its International Spotlight program. Proof the bureau understands the appeal of 'slow travel', it's an effort to draw discerning travelers to history-rich neighbourhoods and bucolic villages where they can sample local delicacies, appreciate traditional crafts, and savour unique scenes. The International Spotlight’s Chinese-Japanese-English website has details of five regional programs plus a few special offers.

Two programs feature Taipei, a delightful city in which to spend time. With a population of 2.7 million, it's far from daunting in size, yet big enough to contain everything an intelligent visitor could require, such as an excellent range of cuisines, dozens of places where you can get an invigorating foot massage, and coffee good enough to put everything back on track.

The Northern Region I program highlights Chengzhong, Dadaocheng, Daan, and Beitou. All but Beitou are in the heart of the city.

Chengzhong means 'in the middle of the area surrounded by the city’s walls'. (Taipei’s walls were demolished before World War I to make space for urban renewal). For well over a century, Chengzhong has been dominated by government offices. But like Westminster in London, between the ministries lie excellent restaurants, bookshops and architectural-historical gems such as Futai Street Mansion and Zhongshan Hall are here. The last, history buffs might be interested to know, is where the Japanese authorities in Taiwan signed the instrument of surrender to the Allies on 25 October 1945; at that time, around 170,000 Japanese military personnel, and perhaps twice as many Japanese civilians, were on the island.

In the late 19th century, Taiwanese oolong tea was in great demand, and Dadaocheng’s merchants grew prosperous supplying buyers as far afield as New York. Tea merchants still do business here but it's the colourful stores on Dihua Street (above, my photo) which best embody this neighbourhood’s traditional character. That said, Dadaocheng’s single most impressive building is devoted to religion rather than commerce: Dalongdong Baoan Temple.

Daan District, 2km to the east, is noticeably more modern. Packed to the gills with stores and restaurants, Daan’s Zhongxiao East Road is likely Taiwan’s busiest shopping zone. Many of the best eats are in the compact Kang Qing Long neighborhood, so called because it includes Yongkang, Qingtian and Longquan streets. Several bus routes stop nearby, and Dongmen MRT Station is just a seven-minute ride from Taipei Main Railway Station. 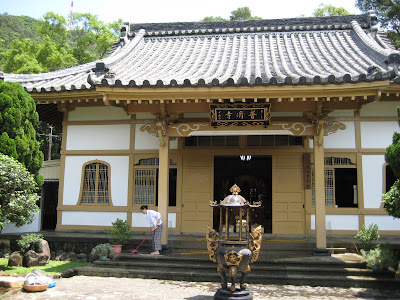 Beitou, which is also best reached by MRT, is famous for its hot springs. These can be enjoyed in various hotels from the affordable to the super-luxurious. For an inexpensive hot-springs experience, head to Longnai Tang, a Japanese-era bungalow with two small indoor pools (one for men, one for women). Senior citizens soak here on winter afternoons; office workers come just before dinner. Beitou also has a gorgeous Japanese-era Buddhist house of worship, Puji Temple (second image, also mine).

The Northern Region II program embraces Taipei’s Zhongshan and Datong districts – both of which offer shopping, restaurants, and attractions including the Museum of Contemporary Art Taipei – as well as some further-flung locations. To non-foodies, the most intriguing of these is in Muzha, near Taipei Zoo and Maokong Gondola. There, U-Theatre Ensemble performs at a hilltop venue reachable only be a steep footpath. This internationally acclaimed troupe has won rave reviews for mesmerizing drum-centered performances magnified by the natural setting.
Posted by Steven Crook... at 8:02 PM No comments:

Taxi fares in Taipei going up

For the first time in several years, taxi fares in Taipei, New Taipei City and Keelung are going up. In theory, all taxis should have started charging the higher rates on October 1, but because the majority haven't yet been able to adjust their meters, many are still using the old formula. Some, it seems, are using unadjusted meters then referring to a printed price list to calculate the right fare. If you're taking lots of taxis around the capital, be prepared for drivers who ask for a bit more than what's shown on the meter, and expect some confusion.

Here's the mathematics if you want to work it out for yourself: There's no change to the basic NTD70 charge for the first 250m, but from now on NTD5 will be added for every 200m, not 250m as before. When the taxi is stationery (at red lights or during a traffic jam), NTD5 will be charged per 80 seconds, instead of 100 seconds.

According to media reports, typical journeys will be about 14% more expensive. Given that Taipei's public transport is pretty good, it is ever worth taking a taxi? It depends where you're going. If you're heading to the National Revolutionary Martyrs Shrine, for instance, a taxi ride from Yuanshan MRT Station will certainly save you some time. But for many other destinations, the MRT is likely to be just as quick. If there's three or four of you, a taxi may still work out cheaper than taking the MRT.

It's unclear whether certain set fares to more remote spots - such as from Wulai's bus stop to the village of Fushan - will also rise.
Posted by Steven Crook... at 1:30 AM 1 comment: