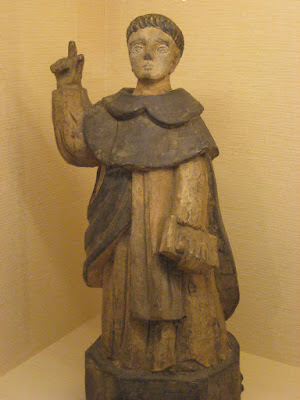 This lengthy paper by Hubert Seiwart, then of the University of Hanover in Germany, published in Volume 21 of the Journal of the Royal Asiatic Society (Hong Kong Branch) back in 1981 goes some way to answering a question often asked by foreigners living in or visiting Taiwan: 'Why do traditional religions continue to be so prominent and popular in a society which is otherwise thoroughly modern?'

In the paper, which looks at the religion called I-Kuan Tao (一貫道, variously translated as 'The Unity Way' or 'The Way of the One that Penetrates Everything'), Seiwart argues that the popularity of such sects isn't in spite of modernization and Westernization but rather a reaction to it. He writes:

Adherence to traditional religious beliefs and practices can be a means of symbolizing cultural continuity and thereby identity... Modernization in China, as probably in most non-Western countries, started in the field of economy and technology. Only gradually (though inevitably) other parts of the socio-cultural system were affected... [As far as] religions which form institutions of their own, they are much less affected by social and economic changes than most other traditional institutions. A society in the process of modernization can more easily afford to cling to traditional religions than for example traditional ways of communication or education.

He points out that the only other social realm independent of economic changes is the arts, but while art is also a symbol of cultural continuity, 'the connoisseurs do not belong to the common people, [and] on a popular level religion holds a much more important place than the arts'.

Siewart then addresses an issue that has long fascinated me: The appearance of Jesus and Mohammed in certain Taiwanese temples.

Western civilization is not objected to in its totality, only its materialism is rejected. The menace of the modern world results from the fact that the West has submitted to materialistic thinking and this materialism gains more and more ground in China as well. Since the Chinese religious traditions and Western religions are equally opposed to this materialism, they are all fighting for the same cause, they are allies not adversaries.

The recognition of Christianity and Islam as true religions equal to the Chinese religious traditions can be observed at different intellectual levels. A rather superficial level is represented by some of the fu-luan cults. While the deities which manifest themselves by the writing stick originally all belonged to the traditional Chinese pantheon, it does happen today that Western gods, above all Jesus and Mohammed [who of course is not regarded by Muslims as a god], give revelations by fu-luan. This integration of Western deities...

When Hubert asked a spirit medium how Jesus and Mohammed could manifest themselves in a Chinese temple, he was told that 'in heaven, no boundaries between East and West exist and all gods live in the same heaven'.

The photo above shows a 19th century Taiwanese folk-religion icon of a Catholic friar, exhibited in Kaohsiung History Museum. 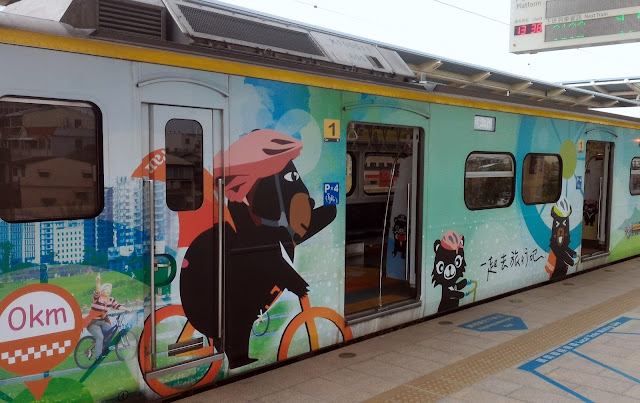 Some days ago I cycled from my home on the outskirts of Tainan to Chaozhou in Pingtung County (屏東縣潮州鎮). To avoid traffic, I took back roads wherever possible, yet managed to travel in a more or less straight line – except for the middle fifth, where having no option other than Highway 22 (which passes near Foguangshan) if I were to cross the Gaoping River – I was compelled to travel east rather than southeast. 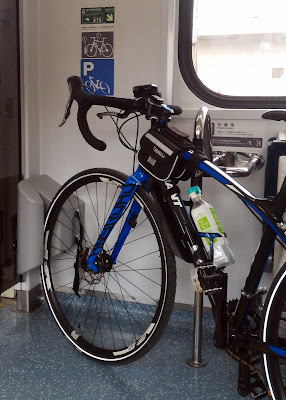 According to Strava, I covered the 78.6km in just under four and a quarter hours. Not Tour de France pace, I know, but I'm proud of what I achieved, and I look forward to a few more long rides before the weather gets too hot. The elevation gain during the ride was 262m. Almost all of that, I'm sure, was accounted for a climb just north of Agongdian Reservoir, and another on Highway 22 where it goes below Freeway 10.

This isn't a route I'd claim to be especially scenic, although I did pass through some very pleasant villages once across the Gaoping River. It's just one which worked out well for me on the day. More useful for visitors to Taiwan is knowing that it's now pretty easy to take your bike on certain trains, and that some commuter trains have carriages which have been adapted for cyclists (see first and second images). However, this isn't possible at all stations. For instance, as I was reaching the end of my ride, I knew my options were limited because I could take my bike aboard at Pingtung (屏東), Xishi (西勢) or Chaozhou, but not Guilai (歸來), Linluo (麟洛) or Zhutian (竹田). 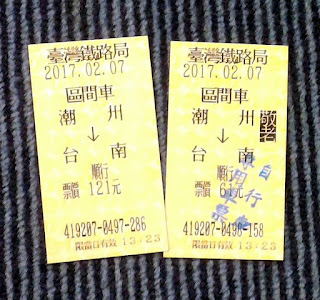 I got to Chaozhou about half an hour before the train to Tainan was scheduled to leave, and the young lady who sold me my tickets (full price for me, half-price for the bicycle – see third image) said it was imperative to be on the platform ten minutes before departure. Do bear that in mind.


And the cost? As with every form of public transport in Taiwan save forthe bullet train, impressively cheap: NTD182 for me and the bicycle, one way. That's USD5.89 or GBP4.74.
Posted by Steven Crook... at 4:31 PM No comments:

A map of Taiwan's living languages

Taiwan News, one of the country's three English-language newspapers, recently published a short article and map showing the dominant languages in various parts of Taiwan. By land area, the Formosan languages spoken by Taiwan's Austronesian indigenous minority are the most prevalent, but much of this area is barely-populated highlands. In the central west and southwest - and also most of Yilan County in the northeast - Taiwanese (which linguists consider a variety of Hokkien, a language widely used in China's Fujian province) is the leading language. Taiwanese is also known as Holo, Minnanhua, Minnanyu or Southern Min. Within this region there are efforts to revive Siraya, spoken by indigenous people in the Tainan area during the brief Dutch occupation in the 17th century, and used for the writing of land contracts well into the 19th century.

In the northwest, Mandarin is the most common language, while there are substantial pockets of Hakka speakers in the northern counties of Hsinchu and Miaoli, and in the southern interior, around places like Meinong.

The map is an oversimplification in that Mandarin is generally the preferred language of younger people, whether they live in Tainan or an aboriginal village, as it remains the language which dominates the education system and the media. Few people under the age of 30 are as articulate in Taiwanese as they are in Mandarin, and several Formosan languages are on the verge of extinction. 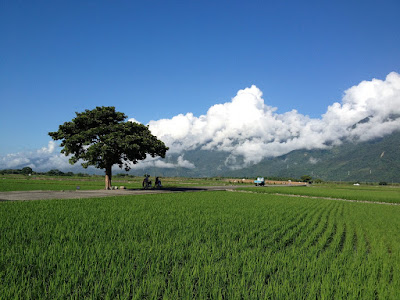 Thanks to Taiwan's semitropical climate, the island's skilled farmers, and high levels of mechanization, Taiwan's paddy fields are among the world's most productive, consistently producing an average of over 4,500kg of rice per hectare. Various types of rice have been grown in Taiwan for at least 4,000 years, but large-scale paddy field cultivation didn't get underway until the Dutch, who controlled the Tainan area between 1624 and 1662, brought in thousands of Fujianese migrants to boost agricultural production. The land area devoted to rice growing expanding throughout the following Zheng, Qing and Japanese periods.

When Japan ceased being self-sufficient in rice production, around the end of World War I, they began importing the staple from Korea and Taiwan, both of which were Japanese colonies at that time. The Japanese authorities soon met with considerable success when they tried to increase rice yields in Taiwan. According to The Rice Economy of Asia (Volume 2) by Randolph Barker, Robert W. Herdt and Beth Rose, “Varieties suited to the semitropical conditions of Taiwan were developed and disseminated in the mid-1920s. The japonica varieties known as ponlai ('heavenly rice') were not only higher yielding than the native indica varieties, but had a shorter growth duration that permitted a significant increase in double cropping.”

Ponlai has been an enduring success. Even now, with consumers showing interest in other kinds of rice, more than five sixths of the rice grown in Taiwan is ponlai. Ponlai is also an ingredient in Taiwan Beer.

In the 1960s, scientists at the International Rice Research Institute in the Philippines worked on breeding new types of rice that were shorter, stiffer-stemmed and would respond better to nitrogen fertilizer. They obtained the dwarfing gene (for shortness) from native Taiwanese rice varieties, crossing them with tall indica varieties.

Despite progress on multiple fronts, nowadays Taiwan's national rice production is for three reasons is now barely half its 1976 peak of 2.7 million tonnes. First, a significant amount of rice-growing land has been concreted over so factories, homes and roads can be built. Secondly – although Taiwan's population has grown around 45% over the past four decades – per capita rice consumption has plummeted. In 1981, the figure was 98kg. The average Taiwanese now consumes approximately 45kg of rice each year – just a quarter of the amount of rice eaten by Vietnamese and Burmese. Interestingly, the Taiwan figure is lower than China, Japan and South Korea, and is now even lower than the global average! The third reason is that Taiwanese rice is expensive by international standards, so surpluses can't be exported in large quantities (although some is sold to Japan). There's little argument as to the main reason for declining rice consumption: Taiwanese now enjoy a much wider range of foods; compared to just 20 years ago, the island's people eat far more bread and pasta.
Posted by Steven Crook... at 3:49 PM No comments: