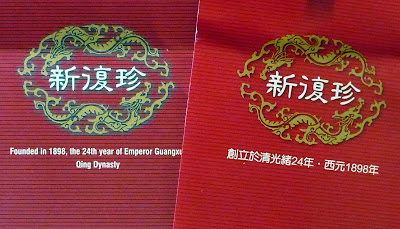 In Hsinchu the other day, I popped into a traditional bakery across the road from the Du Chenghuang Temple. I'd visited this part of the city four or five times before, but never before had I noticed that the tall building that houses the bakery (and a cinema, incidentally) bears Chinese characters which mean 'hundred-year-old shop.'

Intrigued, I went inside. It's the flagship store of Hsin Fu Jean (新復珍, 6 Beimen Street; open: 08.00-22.30 daily), a maker of sweet and savoury delicacies that's been in business since 1898. The staff are friendly, and generous with free samples. Their signature product is a flaky pastry called Chu-chan Cake (竹塹餅), which happens to be the old name of Hsinchu. (Zhuqian would be a more standard spelling than Chu-Chan; back then, most people spoke Holo, and would have pronounced it Tek-kham.) The filling is mostly ground pork, but it's the zesty green onions that make this baked delight especially memorable. The company also sells walnut cake, mochi, and rice puffs.

When I got home and looked more carefully at the leaflets the staff had given me, I noticed something odd. The business was described as having been founded in 1898, the 24th year of the Emperor Guangxu (光緒) of the Qing Dynasty. Yet at that time Taiwan was part of the Japanese Empire; it was the 31st year of the reign of Emperor Meiji (明治天皇). Perhaps the family which founded the bakery was especially loyal to the Qing, or had reasons to despise the Japanese...

Labels: food, history, Hsinchu, things that aren't in the guidebook

Tofu and soy sauce are common and quintessentially Taiwanese foods, and a great deal of the feed given to Taiwan's livestock is soy-based. This commodity is now as important to the country's food system as rice – yet almost all of the soy consumed in Taiwan (whether by humans or livestock) is imported from the US, Canada, Brazil, and Argentina. 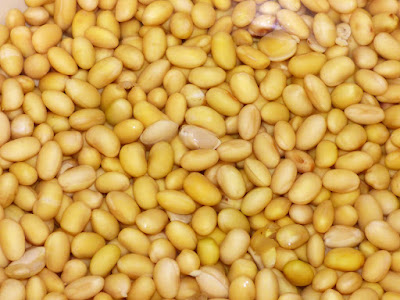 Uncooked, unprocessed soybeans are a light yellow. Good quality water is essential for the production of soy foods, and one reason why Daxi in Taoyuan has become synonymous with dried bean-curd, also known as dòugān (豆干). A lot of the beans imported into Taiwan are, of course, turned into soy sauce: 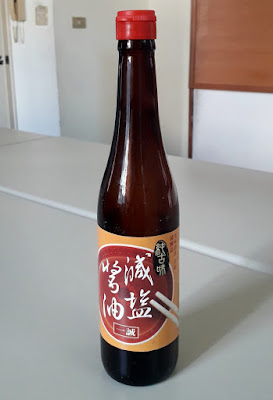 East Taiwan has far fewer people and far less industry than the western half of the island, so it's reasonable to assume the groundwater in Hualien and Taitung counties is pretty good.


One business making the most of East Taiwan's advantages is Dah Chi Bean Curd Sheet. There's an English sign outside the premises at 39-2 Dapu Road, Dapu Village, Chishang Township. If you need to ask a local for directions, show him/her the Chinese name 大池豆皮店, pronounced in Mandarin Dàchí dòupí diàn.

Travellers who read Chinese will likely guess Dah Chi ('big pond') takes its name from a nearby geographical feature. As the crow flies, Dapo Pond is less than 500m away. 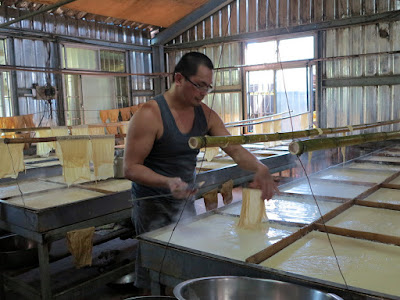 The production process is, on the face of it, quite simple. Nevertheless, considerable skill and patience are required. When soy milk is boiled in an open pan, a film forms on the surface (if you've ordered piping hot soy milk at a Taiwanese breakfast shop, you'll have noticed how quickly the film appears). Some people just stir the film into the liquid, but tofu skin artisans like the staff at Dah Chi collect the yellowish film and hang it up for to dry. 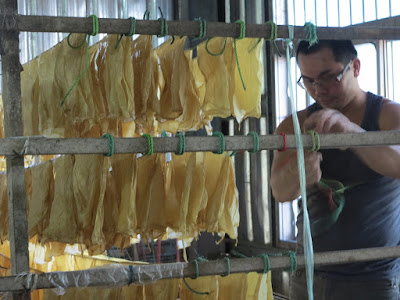 The boss rises at four each morning to grind soybeans and begin boiling the milk. 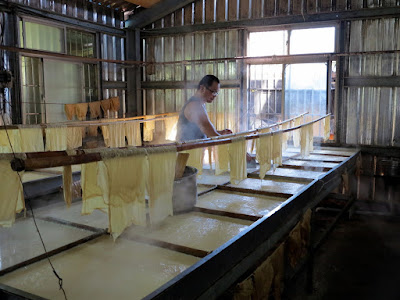 Visitors don't come here merely to witness soy-sheet production. In addition to selling the sheets to households and restaurants in the area (many people use it to wrap rice when making sushi), Dah Chi sells deliciously fresh fried soy sheets (NT$65 per serving), sweetened and unsweetened soy milk, and bean-curd pudding. 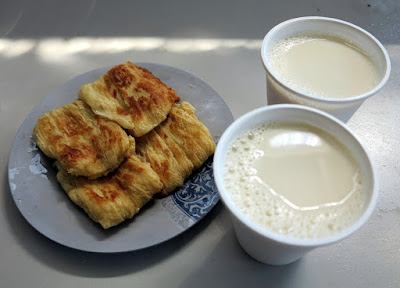 Business hours are 6.30 in the morning until 6 in the evening, or earlier if they sell out. This kind of food is usually eaten for breakfast, so it makes sense to come here before you begin your day's sightseeing. At first glance, the fried soy sheets (above and below) could be mistaken for another Taiwanese favorite, the scallion pancake (蔥油餅). 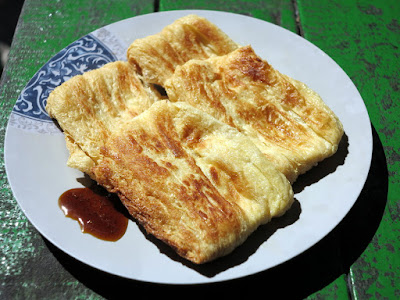 Bean-curd pudding, sometimes called tofu pudding (pictured below) is known as dòuhuā (豆花) in Mandarin. It's often flavored with unsalted peanuts, honey, adzuki beans, or syrup. It makes for a tasty breakfast or dessert. 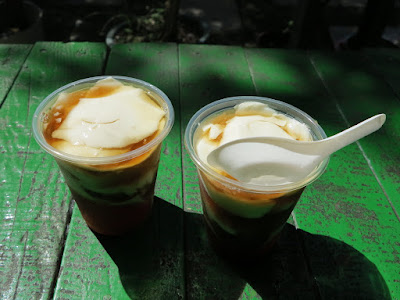 Some Taiwanese consumers avoid genetically-modified organisms, so many food producers (among them Dah Chi) highlight the fact they use non-GMO produce. 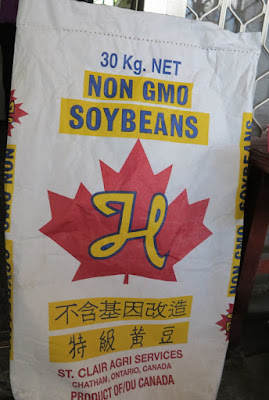 One soy-based delicacy that isn't available at Dah Chi, but which you must try at some point during your stay in Taiwan, is stinky tofu (chòu dòufu, 臭豆腐). If you'd like to try it while in Chishang, see this Chinese-language blog entry for directions to a stinky-tofu eatery near Dah Chi. In night markets throughout Taiwan, stinky tofu often comes served with some spicy sauce and pickled cabbage, like this: 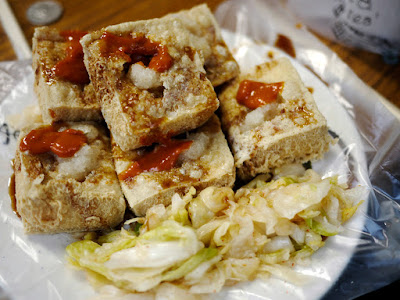 All but the first, second and last of the photos accompanying this blog post were taken by Cheryl Robbins, a leading authority on tourism in Taiwan's indigenous areas. The post was sponsored by the East Rift Valley National Scenic Area Administration.

Labels: food, health, Taitung, things that aren't in the guidebook

Luye and Longtian by bicycle

Taitung is probably Taiwan's most unspoiled and scenic county. Of its 16 divisions (one city, two urban townships and 13 rural townships), perhaps the most attractive is Luye (鹿野鄉). Wherever you go in this township, which covers almost 90km2, you'll see both flat land and steep mountains. 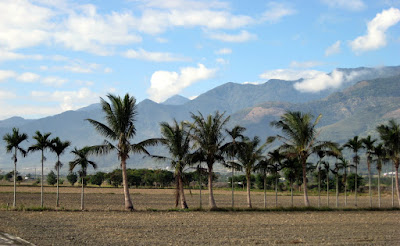 At the time of writing, the population was just under 8,000, divided among seven villages. Many tourists focus their energy on Longtian (龍田), because almost a hundred years ago it was selected by the Japanese colonial authorities for development into a model immigrant village. The newcomers were Japanese eager to leave their overcrowded homeland. The policy was not a great success, however. Many migrants soon left the east, preferring the greater comfort and convenience of the big cities in Taiwan's west.

The Japanese authorities laid out a sensible grid-pattern of streets. In this sense, the village is quite different to many rural settlements in Taiwan, which developed without any sense of urban planning, influenced by the precepts of fengshui. As in other migrant settlements, there was a clinic, a police station, and a guidance office providing farming and technological assistance. 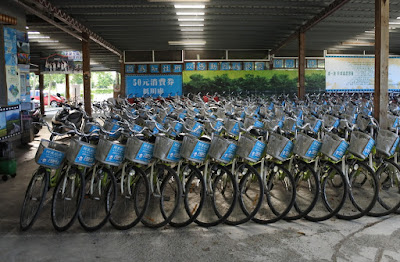 The most convenient place to rent a bike is A-Du's Shop (阿度的店, pictured below) at 232 Guangrong Road, about 100m east of Longtian Elementary School. The shop's telephone number is (089) 550-706; the opening hours are 8:30 am to 6 pm every day. The range of vehicles available for hire includes four-seat electric-powered carts. 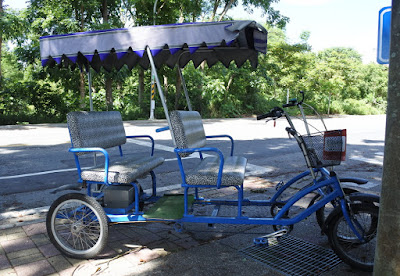 Tourists can follow Longtian Bikeway (龍田自行車道), 7.2km of designated bike paths, or just wander freely. Bilingual signs make finding your way around quite easy, but you'll likely have to come to a complete halt to read the rather small English words on signposts like these. 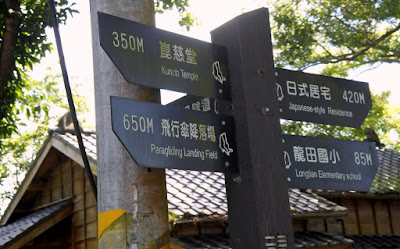 For many, the highlight of the bikeway is Wuling Green Tunnel (武陵綠色隧道, below), a stretch of road shaded by 60-year-old Indian Almond trees. Drive/ride with special care here, as some tourists like to lie down on the road surface to better appreciate the trees. 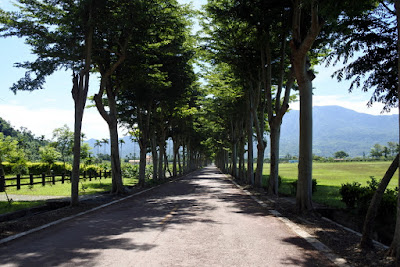 Wherever I go in Taiwan, I seek out Japanese-era landmarks and architecture. Luye Shrine (鹿野神; 308 Guangrong Road) is a Shinto place of worship, built in 1923 using funds provided by one of the Japanese-owned companies then dominating Taiwan's sugar industry. 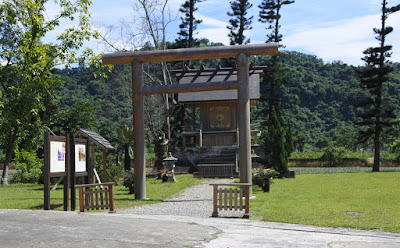 As with many other overtly Japanese structures, this building was demolished after World War II. The foundations remained in place, however, and the shrine (pictured above) was rebuilt in 2014. 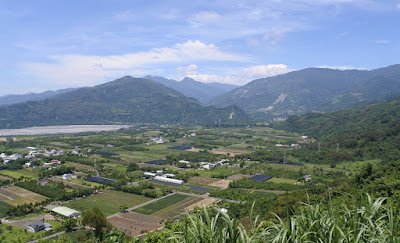 Whether you're riding a bike, driving a car, or taking advantage of the #8168 Tourist Shuttle Bus (go here for route and schedule information), do get yourself to Luye Gaotai (鹿野高台, "Luye Plateau") as the views, like those above, never disappoint. Part of this tableland is given over to tea cultivation; another part is a launchpad for paragliders. 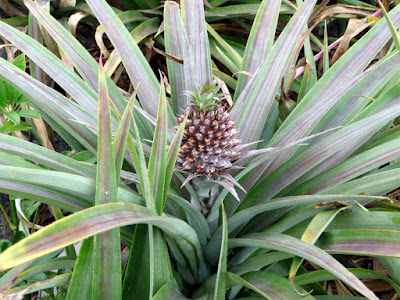 The township government is especially proud of the tea, pineapples and lychees that grow here, but the humble banana also thrives. 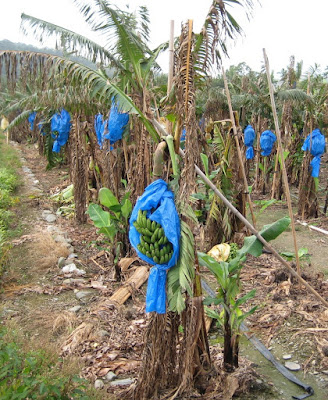 Anyone with an interest in nature should take a look at the Yulong Spring Eco-Trail (玉龍泉生態步道), which begins across the road from Shengan Temple (聖安宮), a small shrine in the lovely village of Yongan (永安). The trail goes down to a creek that's exceptionally rich in insect life. It's also possible to continue hiking to Luye Gaotai. 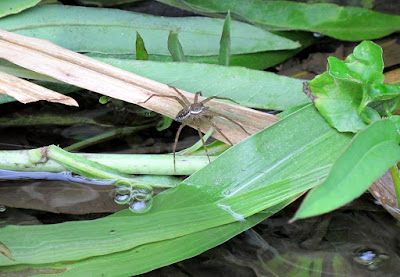