The book is here!

Taiwan: The Bradt Travel Guide is now in physical existence. It's real, not just a series of files on my computer! I received an advance copy yesterday (my other author's copies will follow in a few weeks, I'm told). Since then, apart from sleeping and driving, I've spent almost every moment reading it, checking that last-minute changes I requested were made, scrutinising the maps and photos, and simply enjoying the feel and heft of a nicely-produced tome.

A close look at Lugang's Queen of Heaven Temple

On his Taiwan In Cycles blog, Andrew Kerslake has a lengthy and detailed analysis of the role temples play in Taiwanese culture and the relationship between temples and politicians. It's well worth reading even if you can't make it to the Tianhou Temple in the old coast town of Lukang; much of what he says applies to every shrine on the island.
Posted by Steven Crook... at 4:53 PM No comments:

(Almost) No smoking in Taiwan

It wasn't until earlier this summer, when we spent some time in Malaysia - a country renowned for vigorous government - that I realised just how much progress Taiwan has made in curbing smoking in public places. Even in Kuala Lumpur, the well-run Malaysian capital, quite a few people smoke in places where they expose non-smokers to their exhalations.

In Taiwan, smoking is banned in shops, hotels, restaurants, pubs, train and bus stations and government offices. The law is very widely observed, though I've seen older men ignoring the no-smoking signs on railway platforms. In general, Taiwan has become a much more comfortable place for those with sensitive respiratory systems - partly because of the anti-smoking laws, but also because urban air quality is now much better than it was in the late 20th century.

There's talk of going even further, and making it illegal to smoke while walking along the street, driving a car, or riding a bicycle or motorcycle. The proposed new law could also compel smokers to carry their own ashtrays if they're in a place where there's no receptacle for disposing of cigarette butts. This is an excellent idea, as butts can be seen on almost every urban pavement. But would it be enforced?

Taiwan is a good place for those who dislike smoking, but a less-than-ideal destination for those trying to quit. Cigarettes are very cheap (about NTD60; US$2 or GBP1.20, per packet) and sold in every convenience store.

2016 UPDATE: Cigarettes are getting more expensive, due to health taxes imposed by the government. Many brands cost around NT$90 per packet.
Posted by Steven Crook... at 5:38 PM 1 comment:

Things you may not know about Taiwan...

Taiwan is one of the world's leading pigeon-racing nations. Immense sums are gambled on races and gangsters have been known to try to influence races by doping pigeons. Sometimes, prize pigeons are kidnapped and held for ransom.

The Taiwanese language (a dialect of Fujianese) is rich in idioms. Alcoholics are said to drink like cows (not fish). Parents are said to raise their first child to be a genius, the second like a pig (it rhymes in Taiwanese). A middle-aged man with an eye for much younger women is described as "an old cow eating young grass."

Some of the island's aboriginal tribes continued headhunting until the 1930s. It's said that some tribes still keep secret stashes of skulls deep in the hills. A handful of elderly aboriginal women bear traditional facial tattoos.

As a percentage of its total land area, Taiwan has twice as much forest as Norway and nearly five times more than the UK.

Taiwan is thought to be the source of the Austronesian language family, spoken from Hawaii to New Zealand to Madagascar.

Vehicle number plates and government-issued ID cards never end in 4, as the number (pronounced si, written 四) sounds similar to the Mandarin word for 'death' (si, 死). For this reason, many buildings - especially hospitals - lack a fourth floor; they go from third to fifth.
Posted by Steven Crook... at 8:11 PM No comments:

Labels: aborigines, history, things that aren't in the guidebook 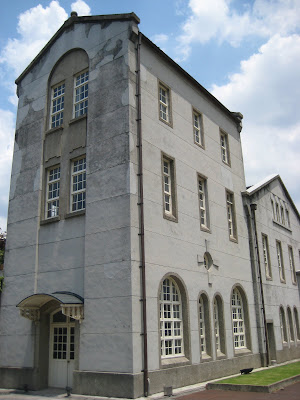 The Huashan 1914 Creative Park is a collection of artists' studios, galleries, rehearsal spaces, performance venues and restaurants in central Taipei.

If you're in Taipei and want to know about upcoming events at the park, check Taiwan's English-language newspapers. The Friday edition of the Taipei Times is your best bet. In my experience, there isn't much point in dropping by the Park on a weekday afternoon, unless you're especially interested in the Japanese colonial-era industrial architecture (top right). Banyans have taken root inside some of the buildings; I thought this eye painted beside a doorway was a nice touch (below left).

Go here for a recent article on the site's history and management. 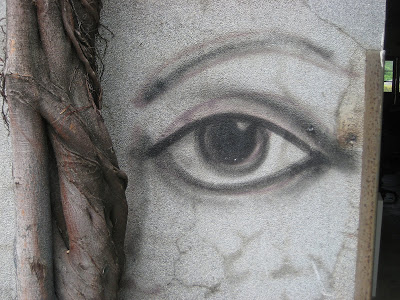 Labels: art, Taipei, things that aren't in the guidebook

Friend and influential blogger Michael Turton has kind words and lovely photos about Taiwan's leading marine museum, which makes for a great stop if you're motoring down to Kenting National Park.
Posted by Steven Crook... at 6:51 AM No comments: 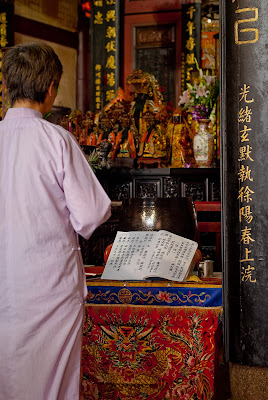 Here in Taiwan we're approaching the end of the seventh month on the lunar calendar, so-called 'Ghost Month'. Ghost Month (click here for a short video) is when, it's believed by many, the gates of hell open and the spirits trapped therein are able to wander freely among the living.

The following is adapted from a newspaper article written this time last year by my friend Rich J. Matheson (who also took this photo of Pudu rites in a Tainan temple):

[In] contrast to Halloween's donning of costumes and trick or treating, Ghost Month is a reverential and solemn affair. Ghosts without descendants to feed them are called 'wandering souls' [or] 'good brothers' and are widely feared. The 'good brothers' are blamed for many ills and must be placated. Placation comes in the form of feasts and chanting. Many taboos are observed during the month. Few Taiwanese will move, get married or open a business. Even swimming is frowned upon as the water is believed to be inhabited by ghosts that can only leave their watery grave by finding a replacement.

Originally, Pudu rites in Taiwan were held continuously throughout the seventh lunar month rotating from one household to another until the end of the month. Following government efforts to curb lavish temple activities, Pudu activities were, for the most part, consolidated on the 15th of the month. Currently, Pudu is often split into three parts: inviting the ghosts on the first, feeding them on the 15th and finally sending them away again on the 29th. For the invitation after the gates are opened, lanterns are hung to guide the ghosts to the offerings. One must be cautious, however, for if too many lanterns are hung attracting too many ghosts, and not enough food is supplied, the spirits could be angered, precipitating a bad year.

Feeding is the most important part of the Pudu rite. Temples will have feasts for the ghosts, but the majority of the feeding is done by the populace who set up tables laden with food in front of their workplaces or homes, and who also burn incense, ghost money and colourful paper dieties.

Pudu (which means 'universal salvation') are sacrificial rites with the intention of appeasing ghosts with no heirs to care for them. Zhongyuan Pudu (中元普渡) falls on the 15th day of the seventh month of the lunar calendar. Similar to 15th of any lunar month, households will prepare food offerings and burn ghost money, only on a much larger scale, as these offerings are not limited to one's own ancestors but to any passing ghosts. These rites are very widely observed in Taiwan.

Finally, the lanterns are taken down. This day is accompanied by more feasts for the wandering souls and some temples invite the god Zhong Kui to assure the good brothers do in fact return, thus keeping the people safe from their mischievous ways after the gates close.
Zhongyuan Pudu is a blend of folk religion, ancestor worship, Taoism (the 15th of the seventh lunar month is also the birthday of a Taoist god, Di Guan) and Buddhism.

The Buddhist religion celebrates the 'Ullambana' rite on the 15th of the seventh lunar month, during which food is offered to the dead. The story goes that Mu Lian, a disciple of Buddha, wanted to save his mother who was languishing in hell and unable to eat food without it turning to fire. Mu Lian organized a large gathering of monks to chant and offer food, thus alleviating his mother;s suffering. This custom has evolved into present-day Zhongyuan Pudu practices.

Zhongyuan Pudu activities of special interest are the Qiang Gu (搶孤) competitions in Toucheng (in Yilan County), Hengchun and Pingtung in which people compete to feed the most ghosts by climbing slippery bamboo poles, assuring themselves of an auspicious year.
The reading of the sutras to help wandering souls find paradise which can be seen in temples throughout Taiwan during Ghost Month. Other events include: Yimin Festival (義民節) at Yimin temples (20th day of the seventh lunar month), Ksitigarbha Bodhisattva Festival (地藏王祭日) (29th day of the month) and the Keelung Water Lantern Festival (基隆放水燈) (14th day).

The prominence of Zhongyuan Pudu arose due to the dangers early immigrants to Taiwan faced, often without family to care for them in death. Therefore there were many wandering souls to appease lest even more calamities occur. Beyond this, however, the true spirit of Zhongyuan Pudu lies in compassion for suffering, strengthening social ties, teaching the youth about filial piety and harmony between the world of the living and the world of the dead.
Posted by Steven Crook... at 4:05 AM No comments:

Long live the Republic of China! 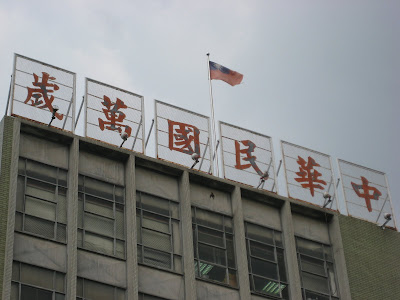 When I first arrived in Taiwan in 1991, you could see these six characters in many public places - bus stations, for instance, and government offices. Nowadays, despite the return to power of the Chinese Nationalists (the KMT), this slogan isn't nearly so evident. Read from right to left, the characters literally mean 'May the Republic of China live ten thousand years!' but a better translation would be 'Long live the Republic of China!' The Mandarin pronunciation of 中華民國萬歲 is Zhonghua Minguo Wan Sui.

Some argue that the ROC is long dead, having passed into history when the People's Republic of China (PRC) was founded in 1949. Others maintain it lingered until the 1970s, but lost all legitimacy when first it withdrew from the United Nations (because the UN voted to recognise the PRC as China's legitimate government); and then President Carter severed diplomatic ties between the ROC and the USA.

However, the ROC on Taiwan continues to meet the four criteria of statehood in international law: a permanent population; a defined territory; an effective government; and the capacity to enter into relations with other countries. At the time of writing, 23 countries have diplomatic relations with the ROC, the most important among them being Paraguay and Panama.

I took this photo at the Jianguo Brewery in central Taipei.
Posted by Steven Crook... at 10:08 PM No comments: