CNNGo thinks Kaohsiung is the third best biking city in Asia, after Kyoto and Beijing, ahead of Jeju and Singapore. I also think it's a splendid place to ride a bike, but for different reasons. The C-Bike system isn't very useful (especially if you're a person of average or larger-than-average Western dimensions) and, as a comment below the article points out, users of the bike trails find themselves crossing major roads fairly often. The climate (reliably dry and sunny, yet not too hot, from October until April) is a massive plus, however.

The final sentence of the Kaohsiung entry suggests the writer didn't do her homework very thoroughly:

If you’re planning a two-to-four day trip from Kaohsiung, we suggest that you ride out toward Taitung City via the scenic South Cross-Island Highway.

The South Cross-Island Highway was mashed by Typhoon Morakot in the summer of 2009 and little has been done to reopen it. You'd have to be a very determined cyclist with a robust set of wheels to make it all the way to Taitung.
Posted by Steven Crook... at 6:09 PM No comments:

Labels: cycling, getting around, Kaohsiung, Taitung, Taiwan in the media

Yesterday's newspapers confirmed what many have suspected for quite a while: The National Palace Museum Southern Branch in Chiayi County won't be ready in 2012, as promised. A partial opening in 2015 is possible and the authorities are hoping to achieve full opening in 2017, say the reports.

Here's an informative if opinionated article on the matter. Go here for a feature article on the delay and the impact it'll have on the county.
Posted by Steven Crook... at 5:30 PM No comments:

"Rebels of the Neon God"

A few days ago, I watched Rebels of the Neon God, Tsai Ming-liang's (蔡明亮) beguiling debut feature film. Tsai, who was born in Malaysia in 1957 and has lived in Taiwan since the late 1970s, is now regarded as one of the country's most talented filmmakers.

Rebels of the Neon God was shot in 1992, and the outdoor scenes were flashbacks to the Taipei I experienced when I first arrived in Taiwan. No mass rapid transit system, just crowded buses; messy construction everywhere; grim apartment blocks; everyone smoking; and flotillas of scooters ridden by helmet-less commuters. YouTube clips from the movie can be found here and here.

The only other Tsai movie I've seen is The Wayward Cloud (2005), which didn't do much for me. This trailer (with French subtitles) will give you an idea why it attracted controversy.

This government-sponsored site has a lot of information about Taiwanese cinema.
Posted by Steven Crook... at 5:14 PM No comments: 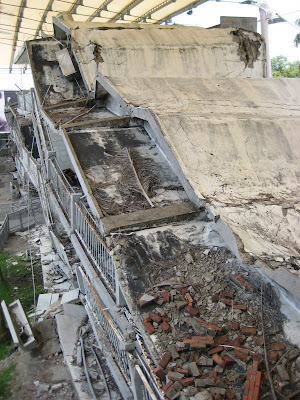 I have vivid memories of the September 21 earthquake of 1999, a disaster which Taiwanese refer to as '921', because it occurred at 1.47am on the 21st day of the ninth month. At the time I was working for a newspaper in Taipei. I had been in bed for less than 10 minutes when our apartment (the top floor of an eight-storey building) started shaking. I turned to my girlfriend (now my wife) and said: 'Don't worry, it's just an earthquake.' Having lived in Taiwan for about seven years at that point, I was used to feeling the occasional tremor.

The shaking got much worse and the power went out, so we got up sharpish. Before leaving the building, I quickly phoned a friend in south Taiwan. He agreed it was the strongest and most terrifying quake we'd experienced in our years in Taiwan.

There was no damage in our neighbourhood but elsewhere in Taipei scores were dead. In central Taiwan, tens of thousands of buildings had collapsed or were damaged beyond repair. Islandwide, the death toll exceeded 2,400.

The disaster hasn't been forgotten. A school campus wrecked by the quake has been turned into a very worthwhile museum which makes for a good stop if you're driving between Taichung and Sun Moon Lake.

The ridges left by the quake in the school's running track made for one of the disaster's most enduring images (see below). These, together with several wrecked classrooms (see above and bottom right), have been preserved as part of the 921 Earthquake Museum. The entire site is engrossing yet sobering. 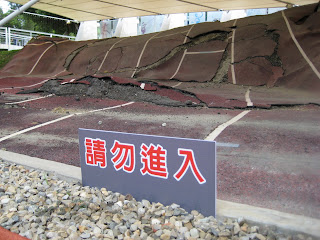 There's a great deal of information about why and how earthquakes occur as well as specific details of the 1999 disaster. Kids enjoy thumbing a panel linked to a seismograph and the regular 3D film presentations.

The museum is open from 9am to 5pm but closed Mondays. Admission is NTD50 for adults, NTD30 for children. The museum's Chinese name is 九二一地震教育園區.

Drivers using the freeway should proceed to Wufeng at km211 on Freeway 3, then turn right onto Highway 3. At km197 they'll see signs pointing to the museum. From Taichung TRA Station, bus #6100 departs every 10—20 minutes throughout the day. 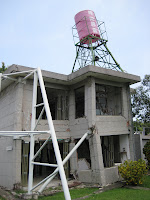 Journey time is 40 minutes and one-way fare costs NTD36. Bus passengers should get off at km197 on Highway 3 and walk for 10 minutes.

If you want to see more evidence of the quake's power, visit this ruined temple.

Most of the bikes available for rent in Taiwan are fine for a few hours leisurely touring but are too small or otherwise unsuitable for long-distance cycling. Fortunately, Giant – one of Taiwan's leading bike manufacturers – rents high-quality bicycles through some of its outlets.

Bicycles can be rented at one shop and returned to another branch. The basic fee for three days or less is NTD1,200, with each additional day costing NTD200. Bikes should be reserved well in advance and payment must be made by credit card; you'll be asked for your height and some other details. There's no central website in English or Chinese because the programme isn't being heavily promoted, but email the Hsinchu branch (giant.d21079@msa.hinet.net) and you'll get sensible answers in English.
Posted by Steven Crook... at 3:02 PM 1 comment:

Labels: cycling, getting around, sport, things that aren't in the guidebook

The new NTD10 coin is the same size and weight as the old version. However, instead of an image of Chiang Kai-shek, the man who ruled Taiwan as a dictator between the end of World War II and his death in 1975, it shows Chiang Wei-shui (蔣渭水). Chiang Wei-shui never attained political office and died soon after his 40th birthday, but his belief in Taiwanese identity and self-rule are celebrated today.

Chiang, who was greatly inspired and influenced by Dr. Sun Yat-sen, the founding father of the Republic of China, co-founded two landmark political groupings: the Taiwanese Cultural Association in 1921 and the Taiwan People's Party in 1927. The former was suppressed by the Japanese colonial authorities in 1931, just before Chiang died of cholera.

The new freeway linking Taipei with Yilan (where Chiang was born) is called the Chiang Wei-shui Memorial Freeway, and there are city streets named after him in Taipei and Yilan.
Posted by Steven Crook... at 3:09 AM No comments: