Know your gods: The Land God 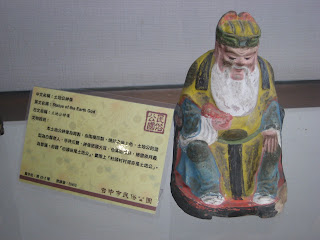 The photo here was taken in the exhibition hall in Taichung Folklore Park, a place I recommend if you're interesting in the Taiwan of yore, folk religion and the traditional way of life. In addition to profane items such as farm tools, rice-husking machines and porcelain pillows, it has a great many censers, josses (Taoist icons) and other items used in rites.

The icon shown is a fairly standard land god (sometimes called an 'earth god'), a minor deity with powers over a defined territory no bigger than a village. Taoyuan County seems to have an exceptional number of land gods - an average of seven per square kilometer according to one report.

The land god is often depicted with a white beard. Sometimes he carries a staff; very occasionally he rides a tiger. According to the National Museum of Natural Science's website:

"The God of Earth, called 'Tu-di-gong' (土地公) in Chinese, is popularly worshipped in Taiwan. A formal name for Tu-di-gong is Fu-de-zheng-shen, meaning the god of good fortune and virtue. Tu-di-gong is a friendly keeper of nature, agriculture and land, and plays an important role in Taiwanese communities, bringing good luck and harmony. Tu-di-gong temples are almost scattered everywhere around Taiwan: in the field or under a tree; in quiet villages or in noisy cities. People pray to the earth god either in a small shrine or in a cosy temple; either in their neighborhood or in their ancestors' grave yard, because they think there must be a god to bless themselves and their ancestors as well.

"This bearded old man in a red or yellow robe always wears a friendly smile on his face. He is not all-powerful but is a benevolent administrator and integrator for families or communities. In Taiwan, Tu-di-gong is actually the god closest to folks, and has become part of their life."