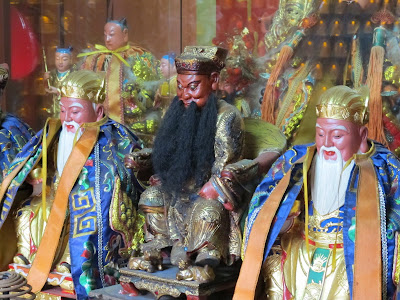 Shennong (神農) is worshiped in many temples, but in few is he the principal deity. Myth has it that he was one of China’s earliest emperors, living from 2737BC to 2698BC, and that he invented the plough and showed people how to farm. He’s also said to have been a pioneer of traditional Chinese healing, trying out on himself hundreds of herbs to ascertain their medicinal value. The Divine Farmer's Herb-Root Classic (神農本草經), which describes 365 medicines, is attributed to Shennong even though it didn’t appear until two millenia later.

In some depictions, Shennong is shown as wearing clothes made of leafs or as a buffalo-horned semi-human. In Chinese farming communities, water buffalo were treated with special respect because they provided muscle and manure. Because of this, even now perhaps one in ten Taiwanese families don't eat beef.

The photo here was taken in Taichung's Wanhe Temple.
Posted by Steven Crook... at 11:04 PM